Every day, on her short eight-block commute, Brenna Berman sees the impact of her work.

Berman joined the City of Chicago in 2011 as deputy budget director, and in 2012 she was made chief information officer. Today, when a bicycle rides by as she walks to work, Berman knows that data accessible through the city helped build an app to locate bike-sharing stations. When Berman crosses a street, she knows new safety measures are making intersections safer, and that, too, is driven by tech improvements she’s involved in.

Now Berman can add the “Array of Things” to the list of projects she sees on her walk home.

The Array of Things is a network of 500 sensor nodes being deployed across Chicago. It launched in fall 2016 and will collect data on air quality, traffic patterns, rainfall and more. Even on her short commute, Berman passes some Array of Things nodes, which are housed in futuristic pods mounted on traffic lights. Those sensors will allow the city to do a level of planning unseen in its history.

‘The Array of Things’

Sensors are not new to cities, but often they’re unsustainable because they’re exposed to the elements and easily damaged. The Array of Things houses its sensors in sensor nodes, or protective shields, with up to 15 sensors, two cameras, a computer, a cooling fan and a microphone. The idea is to gather data about Chicago on a micro level to understand the behaviors of the city.

For instance, Chicago has long based its temperature data on just three sensors placed around the city. The Array of Things will allow Chicago to collect temperature data on a block-by-block basis to understand the Lake Effect and, as a result, better estimate where to apply salt before snow storms.

Berman spent three years contributing to the joint effort between the University of Chicago, Argonne National Laboratory and the City of Chicago. 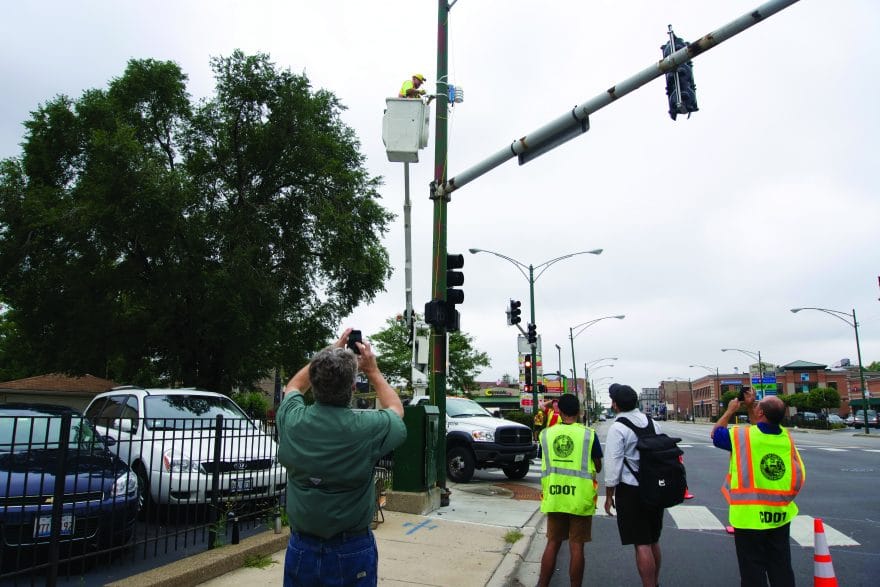 Without those partners, the Array of Things would not have been possible for Chicago. Each partner brought something unique to the table, and the collaboration drove a higher level of innovation, Berman says. The partners made it financially feasible, too, since Chicago couldn’t use public funds on such an experimental endeavor.

The Array of Things is also an example of “what we’ve come to consider a very Chicago approach to tech,” Berman says.

By that, she means the city sought as much public engagement as possible, asking for feedback on everything from the location of sensors to the wording of the privacy policy.

Chicagoans now expect opportunities to engage on tech projects, and they expect access to the city’s data. That’s due to what Berman calls “a very data savvy” culture. Residents are using that data to come up with their own apps and tools.

“Some of the things that are most inspiring for me are the interactions I get to have with people in the community who use the data that we put out to help solve problems in our community,” Berman says.

Before Berman worked for Chicago, she spent 11 years at IBM, where she helped governments implement new technology and business models to reach residents in better ways.

When Mayor Rahm Emanuel was elected, Berman jumped at the opportunity to work for a tech- and data-driven mayor. She had followed his work on the data-driven Obama Campaign and saw him as a leader in the emerging class of modern mayors who use data to make decisions.

Berman also wanted to bring the lessons she had learned in other cities back to Chicago, where she earned her bachelor’s and master’s degrees at the University of Chicago.

She’s been CIO for four-and-a-half years and says, “I’ll run into people now, who say, ‘You’re still here?’ Four years doesn’t seem very long to me. I feel like I’m still working off that list of to-do’s.”

Berman and her team of 120 employees divide their work into core IT operations and service delivery, while sticking to Mayor Emanuel’s goals.

“Four years doesn’t seem very long to me. I feel like I’m still working off that list of to-do’s.”

On the service delivery side, for instance, the IT department helped further Mayor Emanuel’s initiative to improve early education in Chicago by making the application process for early-education seats easier. The application is now online, and it allows the city to make sure its most at-risk youth are placed in those early-education programs.

On the core IT side, Berman’s department is overhauling the city’s phones and moving them to a VOIP (voice over internet protocol) system. It’s critical, as the city’s 32,000 employees are currently using a 25-year-old phone system that won’t be supported much longer. When the VOIP migration is complete in late 2018, it will offer a five-year savings of $5.8 million.

“Chicago is certainly not the only city that’s very, very cautious about the cost of operations, so if you can tie them to sustainable operations and to savings, focusing on that ROI can make them much more attractive,” Berman says. “I haven’t met a mayor yet who doesn’t love a savings announcement.”

While some core IT work is still necessary, the public sector now offers some of the trickiest and most inter