Opportunity of a lifetime

After two years as an administrative assistant and another two years working in Intel’s public relations department, Dawn Jones had proven herself a valuable asset—diligent, dependable and always willing to go the extra mile.

So when the single mother of two decided she wanted to finish her degree, she wasn’t quite sure how her boss would react. Would the company help her with tuition? Would she still have a job?

In the end, she and her manager agreed on a flexible schedule that allowed her to complete her degree and continue her job at Intel simultaneously. Eighteen months later, Jones earned her B.A. in journalism from Arizona State University. 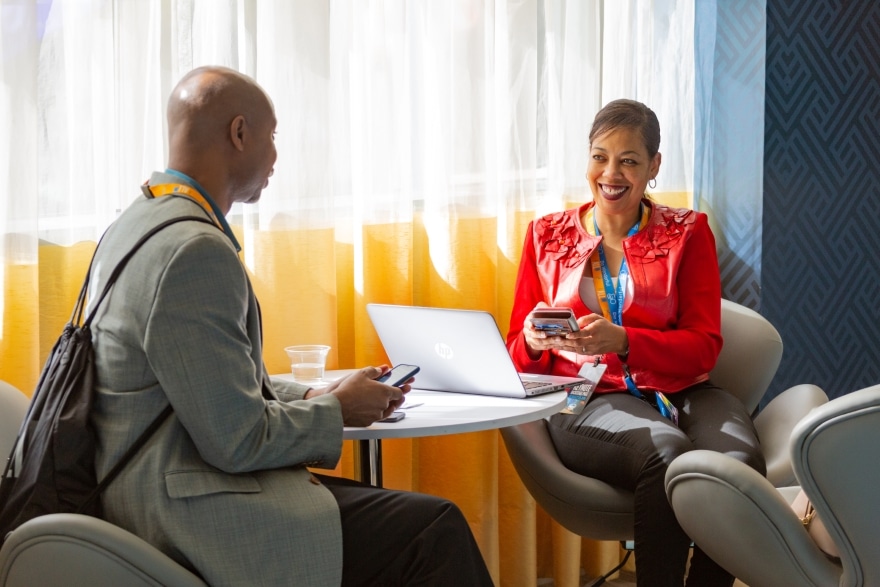 Now, as she looks back on her 22 years with Intel, Jones says the success she’s had can be attributed to one enduring fact: the people she worked with really believed in her.

“Not every boss would’ve taken that gamble, knowing I might move somewhere else within the organization—or to somewhere else entirely,” says Jones, who would later earn a M.S. in communications management from Syracuse University. “They took a chance on me.”

Jones has made it her mission to pay that trust forward.

Three years after being named director of policy and external partnerships, Jones finds herself on the front lines of Intel’s diversity and inclusion (D&I) efforts—a push accelerated by the company’s 2015 decision to invest $300 million in a wide range of D&I initiatives.

According to Jones, the goal is to ensure that Intel’s workforce reflects the percent of women and underrepresented minorities available in the U.S. skilled labor market. 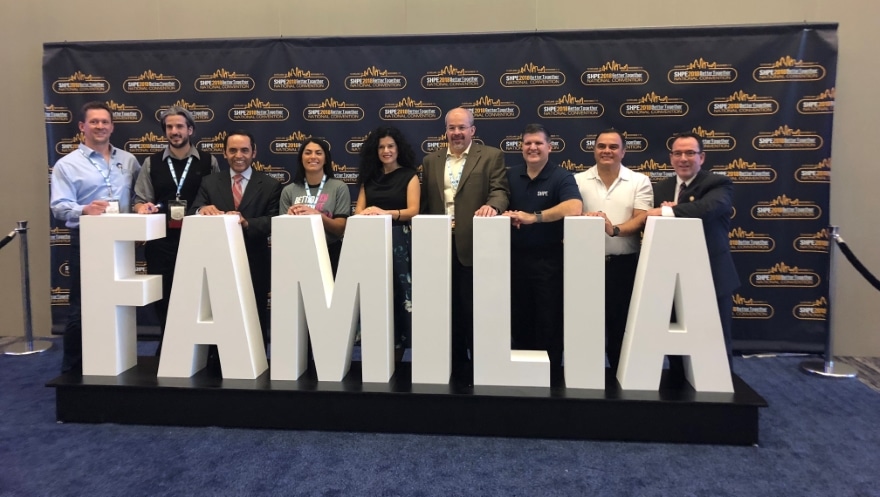 Thanks to efforts focused on hiring, retention and progression, and ranging from pay-equity audits and more flexible health care plans to programs designed to encourage internal upward mobility among people of color, Intel reached its goals in 2018—two years ahead of schedule.

“One of the things that [Chief Diversity and Inclusion Officer] Barbara Whye always says is, ‘When people ask me the business case for diversity, I ask them the business case for homogeneity,’” Jones says. “When you create an environment where different opinions, perspectives and backgrounds are embraced, you get more creativity and collaboration—and that’s good for any business.”

In addition to supporting many of Intel’s internal initiatives, including the company’s employee resource groups and mentoring programs, Jones’ role entails working with external stakeholders to advance the cause of D&I, both within the organization and beyond. 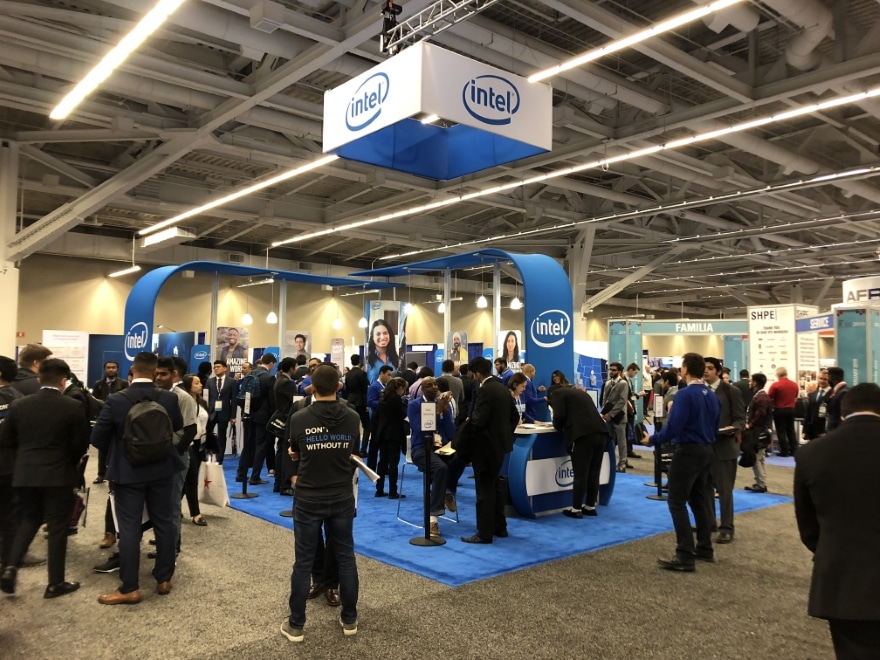 Since taking over as external partnerships director in 2016, Jones has been involved in SHPE initiatives that include continued support for the Latina Luncheon–which Intel helped launch at SHPE’s 2011 annual convention–and coordinating with SHPE’s Berkeley, California, chapter on a program to encourage local Hispanic students to consider careers in the areas of science, technology, engineering and math (better known as STEM).

“The unique thing about SHPE, and something that we encourage our other partners to do, is that they’re always willing to try something different,” Jones says. “It’s not just about sponsorships and branding; it’s about how we ideate collectively to do something new and exciting.”

According to Jones, partnering with entities like SHPE gives Intel employees a way to have a voice in the broader D&I discourse through things like chapter membership.

In addition, these organizations are heavily promoted within Intel’s employee resource groups, created to address the goals and concerns of Hispanics, African Americans, Native Americans, women, veterans, people with disabilities, the LGBTQ community and other “affinity areas.”

More broadly, Jones says the goal is to use Intel’s own success with D&I—and the increased participation in organizations like SHPE—to show the next generation of STEM professionals that it’s possible to rise through the industry ranks.

“What we’re trying to do is to leverage their status as members in these various organizations to engage with the community, to conduct workshops, to volunteer,” Jones says. “Because when young people see someone that looks like them achieve a certain level of success, it’s easier for them to envision themselves achieving something special.”

Opportunity of a lifetime

For Jones, there’s a personal connection to this work. In 2014, not long after taking a job as public affairs manager for Intel’s Austin, Texas, operations, Jones was offered the chance to work on a six-week assignment in Africa as part of a new Intel outreach initiative. Her youngest daughter having just graduated high school, Jones jumped at the chance.

As part of the program, Jones helped lay the groundwork in South Africa, Nigeria and Kenya for She Will Connect Africa, a program to increase digital literacy by connecting 5 million women to technology-related opportunities by 2020. Her job: to figure out how to scale the program to reach more women in a shorter timeframe. 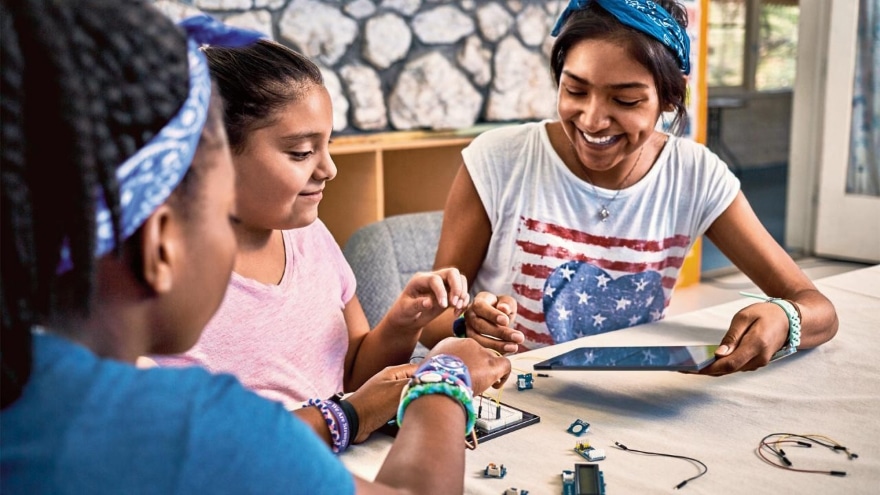 For Jones, the experience was transformative—and not just for the obvious reasons.

“I remember coming home and driving out of the parking garage at the airport with my daughter and almost going the wrong way,” Jones recalls with a laugh, because people drove on the opposite side of the road compared to the U.S. “So that was an adjustment. But to see these different countries and understand the impact companies like ours can have in Africa, it was eye-opening.”

Five years later, She Will Connect Africa is well on the way to meeting its goal. In addition, the program’s scope has been expanded to inspire U.S. middle school girls in disenfranchised communities to become future innovators and spark their interest in technology-related studies.

“To think that I was once a single mom struggling to make it, working full time with two kids, going back to school, restarting my career—none of it would’ve been possible if Intel didn’t give me that chance,” Jones says. “Now that I’m in the mentor role, I’m doing everything I can to ensure that those behind me have the same opportunity.”