Juan Salgado was eight years old when he moved with his mother from a village in the hills of El Salvador—a place with no running water and minimal electricity—to the town of Coatepeque, about 15 miles from the city of Santa Ana. 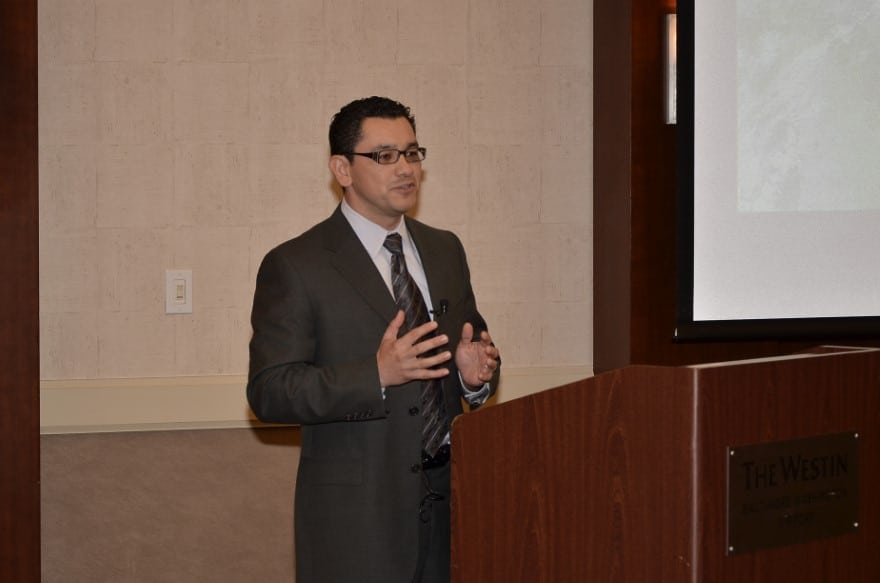 For Salgado, the change was bittersweet. He missed the pristine beauty of the landscape, the freedom of roaming the wilderness with his friends and learning to be resourceful. But he also understood the big picture. Being close to Santa Ana meant access to better education, the kind that could take him where he wanted to go: the United States, where his dad had been living for several years.

“He did what a lot of parents did: moved to the U.S. to make a little money to send back to improve the quality of life for me and my siblings,” says Salgado, systems engineering manager for Northrop Grumman. “Being in a town gave me insight into a new world, new professions—lawyers, doctors. That changed everything.”

It was Salgado’s sixth-grade teacher who first recognized his potential, particularly in science and math. Turns out, the teacher’s husband was a principal at one of the city’s most prestigious private schools. By the following year Salgado was learning things—and meeting people—that he never thought he would.

“I was going to school with kids whose parents were architects and doctors, and I realized that I could bond with them—that I belonged,” Salgado reflects. “It was an eye-opening experience.” 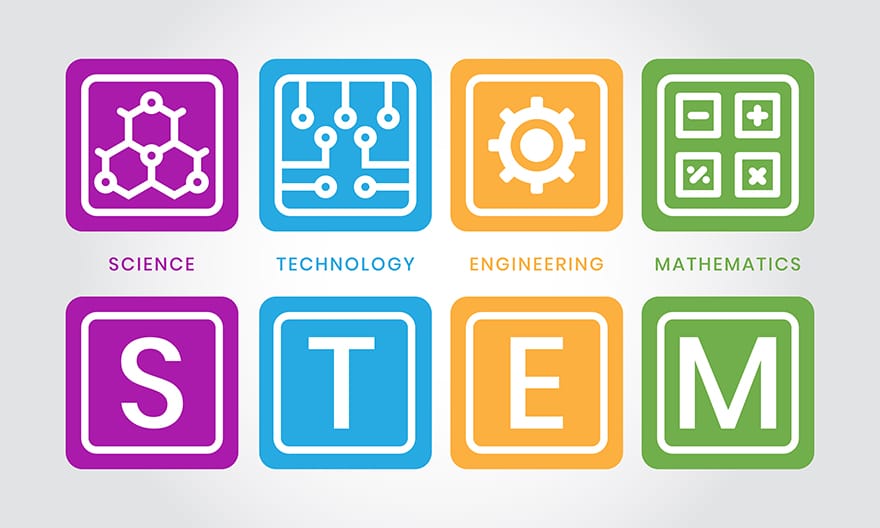 After two years at the school, which required learning English as a prerequisite for graduating, Salgado, then 14, was finally reunited with his dad in the U.S. Attending school in the Mid City neighborhood of Los Angeles, his passion for STEM only grew. Supported by his parents, Salgado enrolled at San Fernando High School; a magnet school about 40 miles from home which focused on math, science and technology.

“Now I’m in a real STEM program, learning the things I loved and college suddenly becomes a real possibility,” Salgado remembers. “By my final year, I knew I wanted to be an engineer.”

Accepted by the University of Southern California, home to one of the best engineering programs in the country, Salgado wanted to earn as much money as he could before starting college. After applying for a job at a nearby fast-food restaurant, Salgado was told by the manager that he didn’t have enough experience.

Later that afternoon, Salgado received a call from one of his high-school counselors. Litton Industries was looking for a summer intern and the counselor thought Salgado would be a perfect fit.

“I thought it was Lipton, like the tea company,” Salgado recalls with a laugh. “But Litton was a large aerospace company, which later became part of Northrop Grumman. I was connected with the chief scientist, who brought me in for an interview. He asked if I had a resume. I had no idea what that was. He knew I had a different life experience and appeared less prepared than other candidates. But he was willing to look past all of that and take a chance on me. That’s something I’ve never forgotten.”

During Salgado’s freshman year at USC, a friend introduced him to the Society of Hispanic Professional Engineers, an organization committed to empowering Hispanics in STEM, specifically through its dozens of college chapters.

As the freshman representative in the USC chapter, Salgado fell in love with SHPE’s mission and cause, helping organize a number of on-campus events. But between the rigors of school and his ongoing internship at Northrop Grumman, Salgado’s involvement began to wane—at least temporarily. 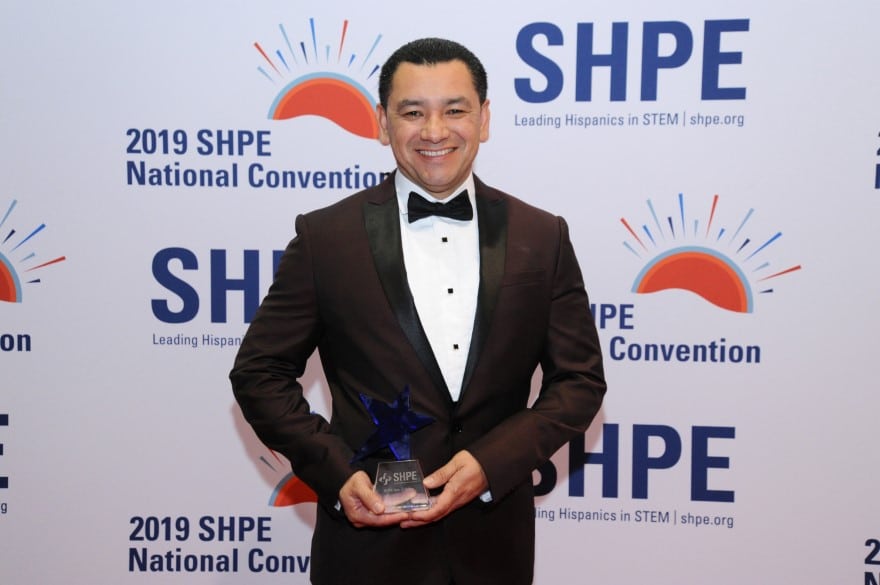 By his senior year, Salgado’s internship had morphed into a full-time position as a test engineer in Northrop Grumman’s Navigation Systems business, where he was responsible for testing navigation systems and inertial sensors for a broad customer base that included both commercial entities and the Department of Defense.

Over the next 20 years, Salgado would go on to helm a variety of posts for the global aerospace and defense technology firm: helping develop remote sensing technology for the company’s large space payload products; providing systems engineering integration and test (better known as SEIT) expertise to programs including navigation systems and integrated avionics; and—in his current role—overseeing a 300-person department of engineers and scientists at Northrop Grumman’s Mission Systems facility in Woodland Hills, California.

“One thing I’ve always appreciated about this company and its culture is how they’ve given me every opportunity to thrive,” Salgado says. “I’ve never had to worry about feeling like a fish out of water, because they’ve dedicated the time and resources to making sure I could tackle anything that was put in front of me with confidence and a great sense of accountability.”

Like the mentors who guided his own career, Salgado is using his experience to help the next generation of Northrop Grumman engineers—many of whom come from similarly challenging backgrounds.

“I have an opportunity to give guidance to others coming up in their careers,” Salgado says. “To show them that, no matter what your background, you can do things here. That’s the culture.” 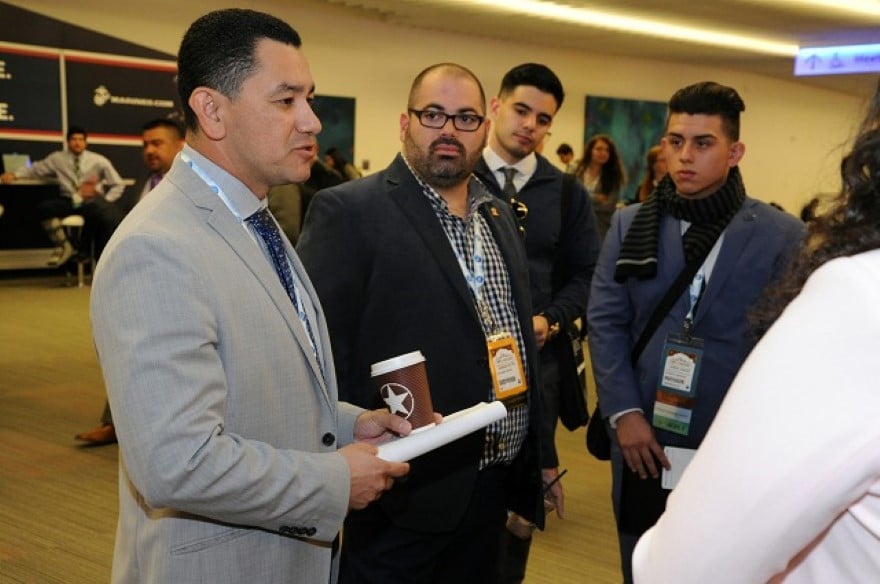 He’s also found time to reengage with SHPE: hosting workshops at nearby university chapters on everything from interview tips to how to write a good resume; representing Northrop Grumman on SHPE’s industry partnership council; and attending the organization’s national convention to look for up-and-coming STEM talent. To date, Salgado has extended more than one hundred internship and full-time career opportunities to SHPE members.

In recognition of his efforts, SHPE honored Salgado with the 2019 SHPE Star of Today award, presented at the organization’s 2019 National Convention in Phoenix.

“To me, Juan’s story is incredible, and one that we can all learn from,” says SHPE CEO Raquel Tamez. “He’s made the most of every opportunity, he’s valued the importance of mentorship and now he’s paying it all forward and empowering a new generation of Hispanics in STEM.”

For Salgado, it was further validation that the journey he embarked on all those years ago was worth every step.

“This was never something I planned for,” Salgado says. “But you find yourself in that moment and you can’t help but reflect on how you got here, the challenges you’ve had to overcome, the people that have helped you along the way. It’s a tribute to all of them.”