What began with six people in a Chicago conference room has, in the decade since, grown to include more than 120 members from throughout Heineken’s ranks—male and female, millennials and boomers, executives and salespeople. Hosting conferences throughout the country, the forum is a sponsor of the Network of Executive Women (NEW), one of the world’s largest businesswomen’s leadership organizations. 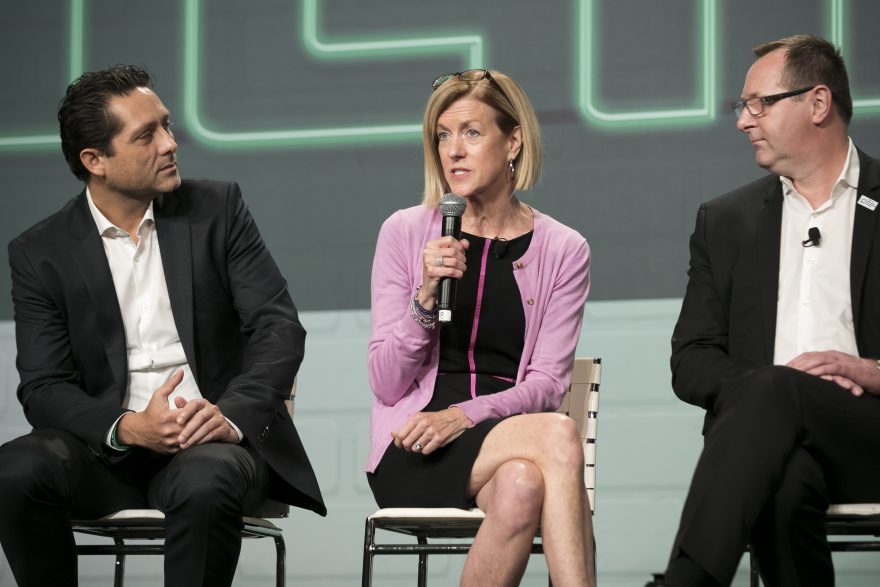 Spearheading the project, in what has long been a male-dominated industry, though Heineken proved counter to that trend, only raised the degree of difficulty.

“I remember thinking it would be worse to start something and have it fail than if I’d never tried at all,” Kinch recalls. “Looking back at what we’ve accomplished, it wound up being transformative. We’re proud to say that at Heineken USA, women currently make up 40 percent of all employees, and 48 percent of our senior leadership.”

Kinch credits Heineken’s collaborative culture—a sense of global openness harkening to the company’s Dutch roots (it was founded in Amsterdam in 1864)—for providing the forum with a warm, welcoming incubator.

She recalls how, during a recent regional event, a junior saleswoman practiced lines she’d written on an index card for an introduction she was slated to make in front of 150 industry peers. “She might never have had that chance to speak in front of that many people,” Kinch says. “The experiences they get and take with them are what the forum is all about.”

And yet, there are broader efforts at work.

In 2014, around the time Heineken launched its “Social networking since 1864” campaign—a reference to the sociability of imbibing—Kinch and her New York-based colleagues sought to move everyone, including managers, into open concept office seating, where they’d be within sight and earshot of each other.

“When you have that closeness and connection, it allows for a candor where you feel comfortable challenging one another,” Kinch says, tracing back this emphasis on conversation to CEO Jean-Francois von Boxmeer. “You hear something and can chime in in real time. I think that’s rare for a company of our size.”

What’s the message in a bottle?

When Kinch signed on to Heineken USA in 1998, so-called two-barrel breweries weren’t on anyone’s radar, yet in the subsequent two decades, there’s been a nearly four-fold increase in small, artisanal upstarts. So while beer is more popular than ever, Kinch explains, “there’s also more and more competition every day.”

That turns much attention, legal and otherwise, to marketing. Yet that area, too, is a challenge in the digital era.

There’s a fine line between progressive advertising and a misstep with instant social media backlash (think back to summer 2017, with Pepsi’s ad accused of trivializing the Black Lives Matter movement). What’s more, consumer information has never been more accessible—or more vulnerable. Securing that data can mean the difference between a successful, wide-reaching marketing campaign and a public-relations debacle—situation Kinch and her colleagues have worked hard to prevent. 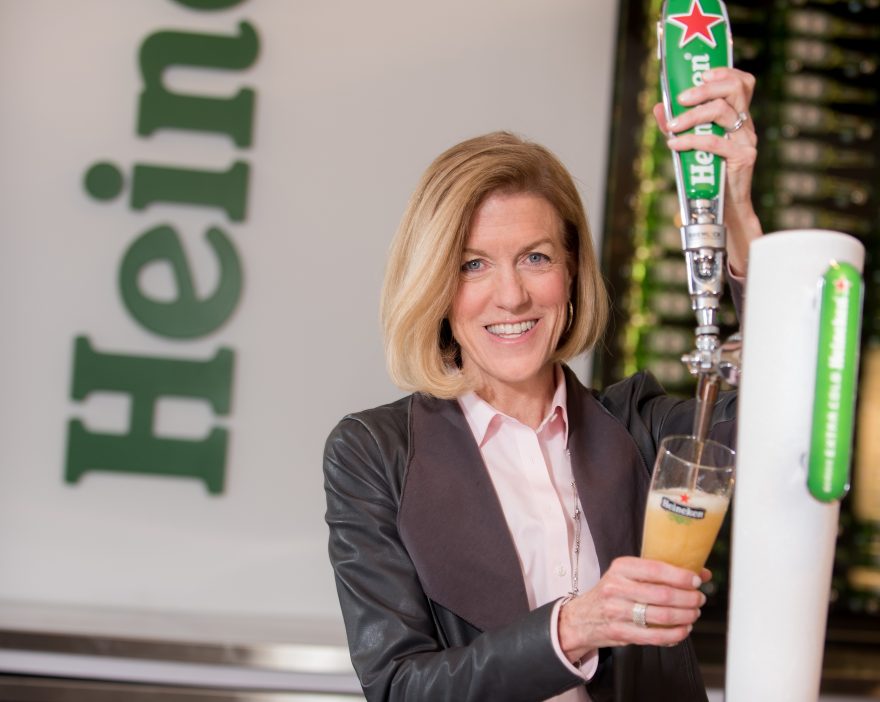 “There’s a desire to push boundaries and develop marketing that catches people’s attention,” Kinch says. “I really value leading a team that helps our creatives do great work, while maintaining our reputation as responsible marketers.”

Yet even in the whimsical world of modern marketing, Heineken and other brands face an arcane regulatory framework, with many laws relating to beer advertising remaining unchanged since the repeal of Prohibition in 1933, making it challenging to be original.

“You learn to find creative ways to work within these sometimes antiquated laws,” Kinch says. “How do you apply a law written in the 1930s to a Snapchat post or a bold marketing plan? To be successful in this industry, you have to embrace those kinds of challenges.”

The most important text

Growing up, Kinch never considered a career in law. Her mother? “My mom would say I was destined for this, because I was always so argumentative,” Kinch jokes.

A self-described late-bloomer, Kinch says she didn’t start taking her learning seriously until her freshman year at Georgetown University. There were the requisite classes in business and law, both of which proved useful. But it was philosophy and sociology that Kinch found most stimulating.

“I really enjoyed the debate and conversation aspects of some of those courses,” Kinch recalls. “It still helps me today; not just to better understand people from a leadership perspective, but also in thinking through problems in a more thoughtful way.”

After earning her J.D. from Boston College Law School in 1987, Kinch entered private practice as an associate at the nearby White & Chase. Six years later, at the age of 33, she accepted the position of vice president and general counsel for the American arm of Remy Cointreau, where she remained until joining Heineken USA in 1998.

Nearly 20 years later, the landscapes—of beer, of the GC’s roles and demands, of women’s voices in the workplace—have shifted considerably. But while Kinch’s longevity speaks to her willingness to grow and adapt, she knows it’s Heineken’s family-like culture, old as the beer itself, which makes it all possible.

“What makes our legal department different is how much we embrace the business side of our roles,” Kinch says. “I’m always so proud of our team, both because of how hard they work and because I know they’re valued in the company.” 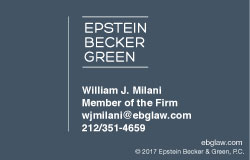 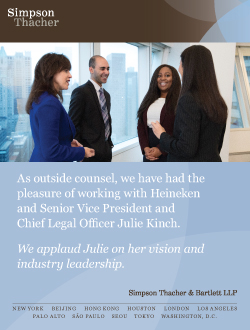