Lisa Gressel knew what a big fire looked like. Truth be told, during her 30 years as a general counsel, she’d put out more than a few. Fires so big she can’t even talk about them.

These were smaller than that—much smaller. A manager who left without telling his replacement about the patio furniture in storage, causing the company to spend thousands on new chairs and tables. Individual restaurants signing their own music-licensing agreements and admitting slip-and-fall faults without consulting the legal department.

But Gressel knew even small fires had to be put out eventually, and for  the very reason you might expect.

“They seem like such trivial processes to worry about,” Gressel says. “But if you’re going to put the company in the best position to grow and succeed, you can’t let the minor issues get out of hand or they just take over.”

Since becoming general counsel for P.F. Chang’s in 2016, Gressel has helped usher in a culture of efficiency for the famed Asian restaurant chain. One that’s having ripple effects throughout the company.

She’d seen this movie before: a business launches to immediate and fervent fanfare, only to have the subsequent growth outpace management’s ability to keep up with it.

Founded in 1993, P.F. Chang’s had opened more than 200 restaurants when it was purchased by private equity firm, Centerbridge, in 2012. And while ownership quickly moved to reorganize the company’s upper ranks, by the time Gressel arrived four years later, some operational fires still remained. 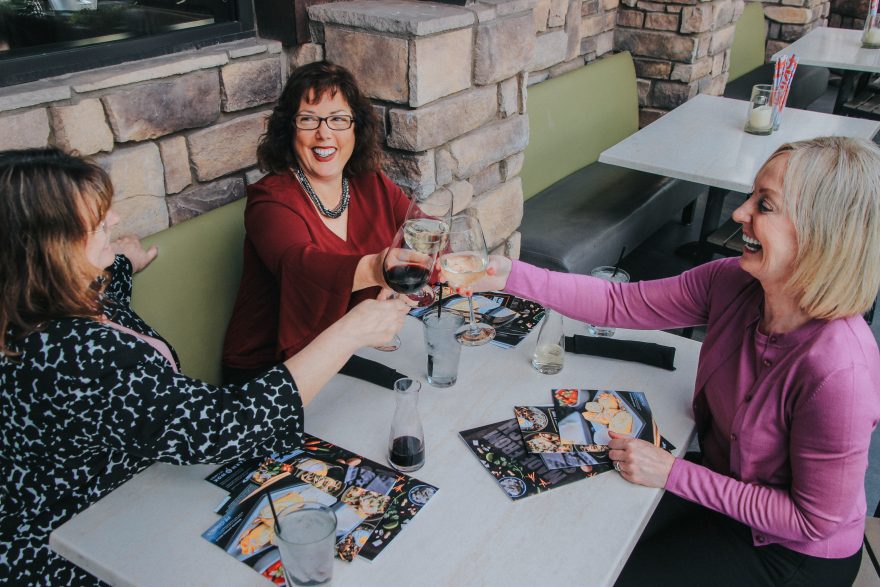 This was especially true of the legal department, which was in dire need of a modern document-management solution.

“The first thing I asked when I joined the company was, ‘Where are our contracts?’” Gressel recalls. “And no one had a clear answer to that question.”

After creating a brand new contract database, Gressel and her team worked to standardize the terms and conditions for all future restaurant leases.

In years past, whenever an individual restaurant wanted to use a new discount or marketing slogan, P.F. Chang’s legal department had to drop everything it was doing and approve the changes (with tweaks, of course). Working closely with the company’s marketing team, Gressel helped implement a series of “plug and play” templates that allow the marketing department to interchange jargon without having to seek additional legal review.

However, Gressel’s overhauls are about more than just the minutiae. In an effort to prevent sexual harassment—an issue that’s long plagued the restaurant industry—she worked closely with human resources to provide extensive training for restaurant managers.

Gressel has even made it a talking point at the company’s regional partner meetings, using often-humorous anecdotes from her professional past to illustrate the importance of communication and transparency.

“Historically, chief legal officers and general counsels haven’t been out front,” Gressel says. “What I’ve always sought to do is to let people know that if something happens, they shouldn’t be afraid to call me.”

For Gressel, having an open-door policy is paramount to business efficiency. Soon after joining P.F. Chang’s, she scheduled face-to-face meetings with each of the company’s paralegals, to learn more about their daily routines. In doing so, Gressel learned how outdated or superfluous tasks were hindering productivity.

“One paralegal told me she was responsible for sending four massive Excel spreadsheets every month,” Gressel illustrates. “So I told her not to send them, and see who asked for it. And nobody did!”

That perspective—thinking about every process in terms of how it improves the guest experience—is something Gressel long endorsed.

After earning a pair of degrees from the University of Cincinnati—a bachelor’s in economics in 1980 and a J.D. three years later—Gressel’s career began at the nearby General Electric (GE) aircraft engine division, where she served from 1986 to 2002, eventually being promoted as the company’s first deputy general counsel.

For the Queen City native, working in her hometown for one of the country’s most famous companies was more than a dream come true; it was an all-courses education.

“GE was where I really became concerned with making legal part of the broader business processes,” says Gressel, whose efforts at GE garnered her Six Sigma Green Belt certification.

As senior counsel for GE’s international military business, she negotiated deals with defense departments all over the world—including those located in the Middle East, where Gressel learned another valuable lesson.

“In the beginning, you’d always hear how you couldn’t do something because you’re a woman,” Gressel recalls. “I never allowed myself to be restrained like that. My view has always been, you just make it work.”

If GE gave Gressel the tools, EaglePicher was her first test in how to use them. As the battery manufacturer’s first-ever general counsel, Gressel learned how to be an effective business partner despite limited resources (though Neil Armstrong was on the board).

Everywhere she worked, Gressel sought to learn something new—to understand a new industry as quickly as she could. At Nortel Networks, it was privacy and data protection. During her three years with Avella Specialty Pharmacy, she saw the potential pitfalls of a company experiencing rapid growth. While developing a compliance and ethics program for PetSmart, she came to understand the employment nuances of a big box store.

And thanks to a recent board appointment to the National Restaurant Association’s Restaurant Law Center, composed of chief legal officers from throughout the industry, she has an overall position that promises to be even more impactful.

“In the end, it’s about putting the business on the best possible footing, both for potential buyers and the thousands of customers we interact with every day,” Gressel says. “Whether it’s the regulations, the internal systems, the employees. How P.F. Chang’s brings all of these worlds and challenges together continues to be a huge motivator.” 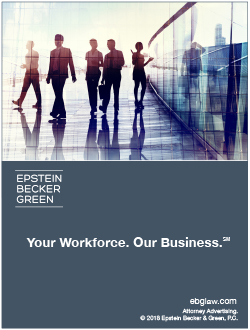 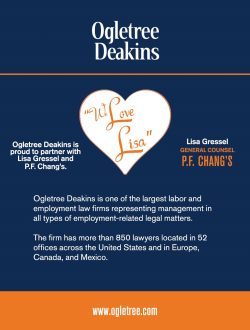