Engineering his own reality

Picture a room full of engineers and U.S. government stakeholders—the vanguard of the country’s nuclear deterrent program—discussing how to best evaluate and upgrade critical equipment. Within a few moments, they enter a mixed reality environment where they can see system requirements and digital models up close—all on a single collaborative digital screen. 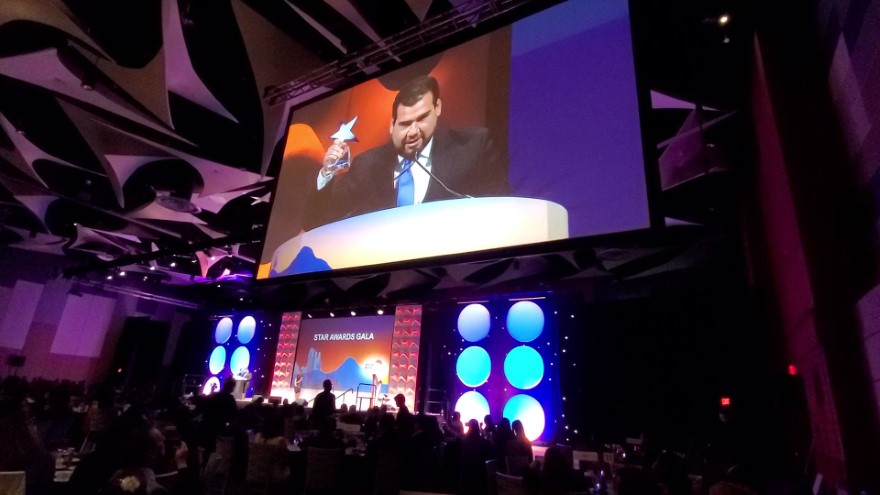 Or a field engineer at a shipyard who wants to show her supervisor—located in another state—pertinent information about the physical configuration of a component on a ship. With the use of an AR/VR-connected tech, the engineer enters a fully immersive virtual environment, joining her supervisor to show her and discuss the findings in real time.

With the use of AR/VR and immersive technologies, teams from across the globe can see, discuss and authorize solutions to problems based on proper information provided by the environment. Before long, these technologies—currently being developed by defense and aerospace giant BAE Systems Inc.—will be as common as radar and ICT.

For Louis Terry, a senior systems engineer at the company’s Rockville, Maryland, and Washington, D.C., facilities, these tools are more than just sci-fi brought to life—they’re his livelihood. 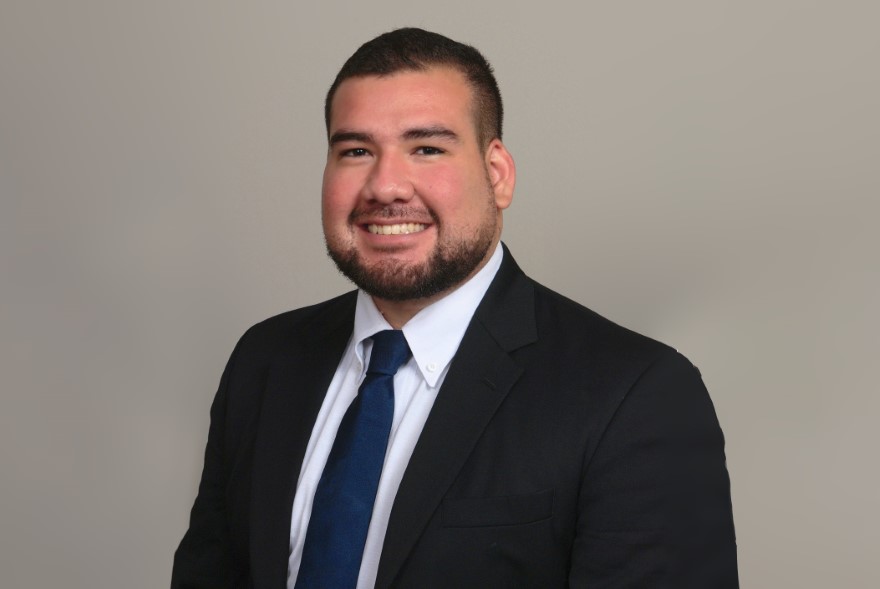 “AR/VR has been around for quite some time really, so it’s great to see the collaboration happening across all sectors of BAE Systems to establish a successful roadmap which will allow any user, not just engineers, to understand and visualize complex systems,” Terry says. “This technology can ultimately provide immersive training experiences, visualization for procedures, and multi-user design reviews that will enhance traditional engineering activities.”

That Terry is doing so at just 26, a mere four years removed from college, makes it all the more impressive.

The son of Peruvian immigrants who came to the U.S. in the late 1980s and early 1990s, Terry grew up in the Washington, D.C., suburbs of Rockville, and Olney, Maryland. From an early age, he was enamored with math and science. But it wasn’t until his sophomore year at the University of Maryland, College Park that Terry’s passion for engineering really took off—albeit with a bit of turbulence.

“It was really hard at first. And if there was one thing I wish I had taken more seriously in high school, it was computer-aided design,” Terry recalls. “I actually used a digital toolset that I’m still using today. But if I had spent a little more time with it, I feel like the learning curve in college wouldn’t have been as steep.” 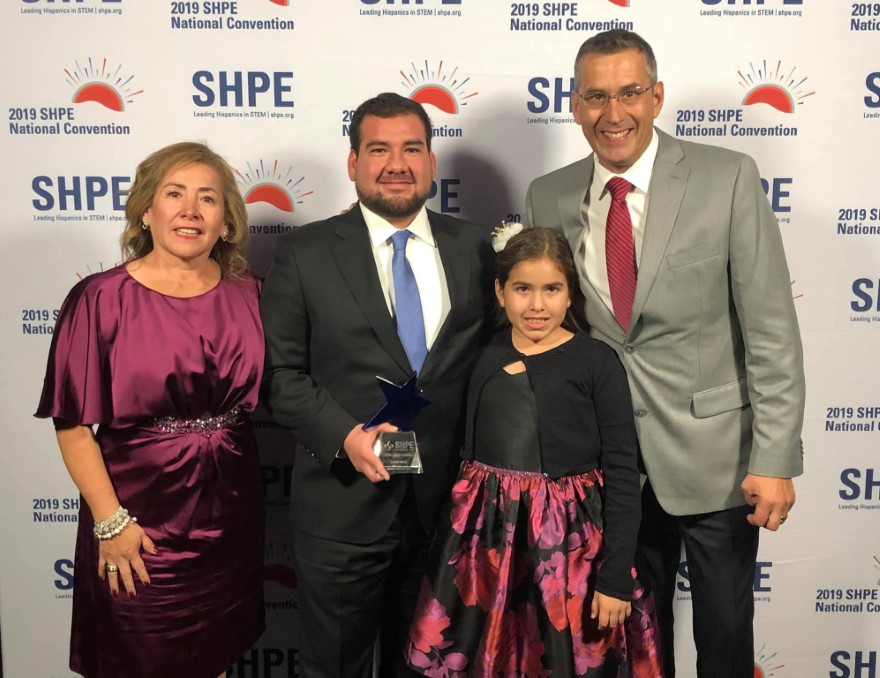 Later in his sophomore year, after being accepted into the school’s engineering program, Terry was introduced to the Society of Hispanic Professional Engineers. Founded in 1974, the 13,000-member organization has more than 245 campus chapters throughout the U.S.—including at UMD.

Before long, Terry was helping the chapter with community outreach efforts, including Noche de Ciencias (Family Science Nights), where he and others would visit local schools to conduct STEM-related activities with students and their families.

“I made a lot of good friends through SHPE and met a lot of great people,” Terry reflects. “It was a really open environment, and everyone was always really helpful.”

After earning his B.S. in 2016, Terry spent two years as a supplier quality engineer at industrial products giant Textron, where he worked with vendors in the supply chain to ensure that products being delivered met design and quality requirements.

In 2018 he joined BAE Systems as a mechanical engineer, where he conducted analysis and supported test engineering activities for verification and validation processes. Despite his admittedly limited knowledge of the technology, Terry was tapped to help support the sector’s VR/AR integration efforts. 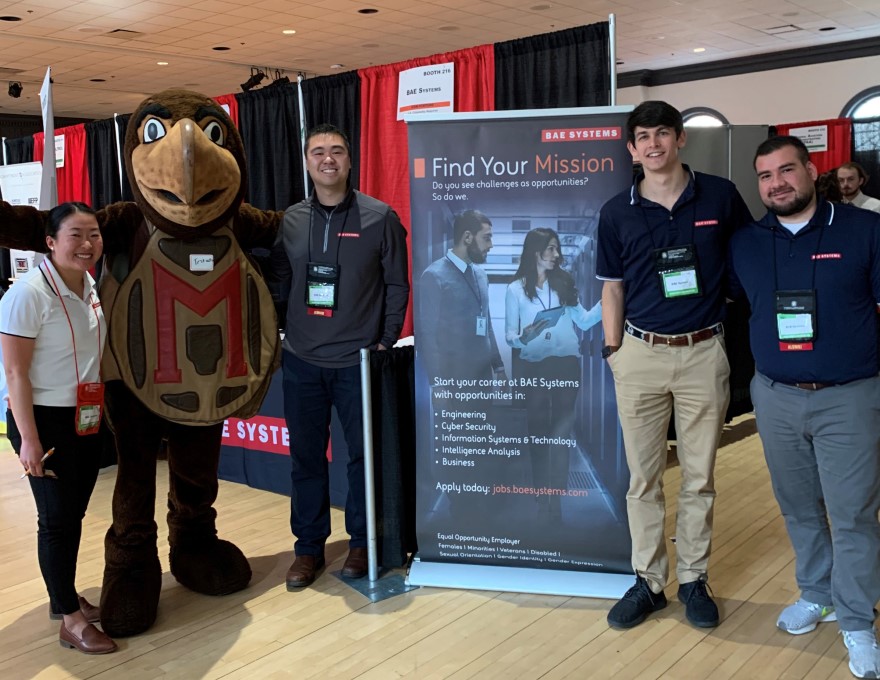 Within a year, he was promoted to senior systems engineer, with duties that included identifying potential use cases and developing pilot projects aimed at proving the technology’s efficacy.

The role puts him on the front lines of BAE Systems’ digital engineering strategy—specifically for clients in the intelligence and security sectors. The technology is being implemented to train incoming engineers—replacing extensive manuals with 3D visualization platforms designed to give a more detailed view of systems and processes BAE Systems supports.

“This company does an amazing job of helping people learn on the job, and I’m an example of that,” Terry says. “It’s a creative, collaborative environment and the leadership strives to help you grow.”

Indeed, if there’s been one constant in Terry’s young career, it’s the importance of mentorship: from the staff at UMD’s Center for Minorities in Science and Engineering—whom he credits for helping him make the often-difficult transition to post-college life—to the leadership at BAE Systems’ Rockville facility. 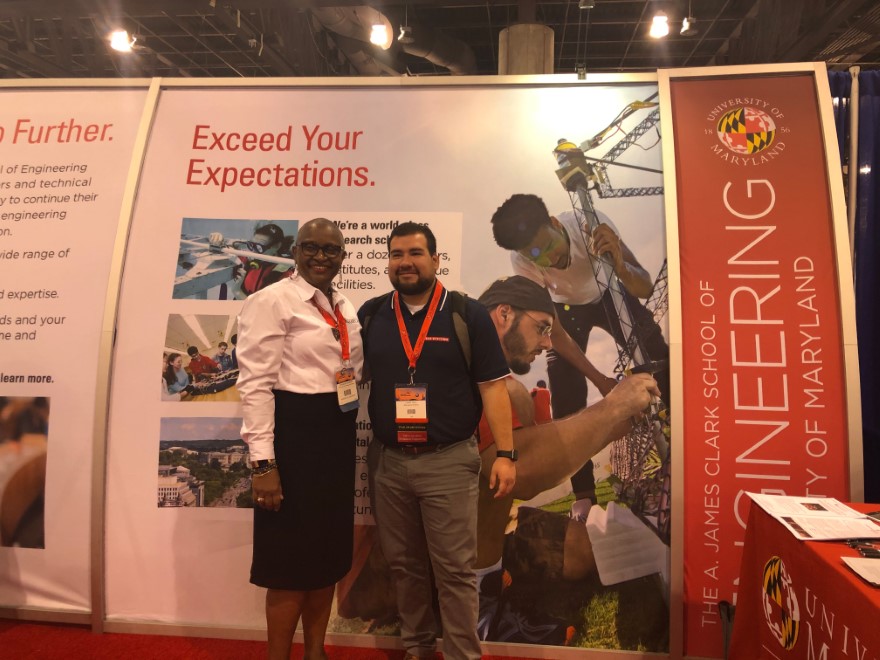 Now he’s trying to pay those efforts forward. He spends much of his personal time giving students and newer BAE Systems employees advice on how to navigate the often rigorous demands of working for one of the world’s leading technology companies.

“It’s something I want to continue to do for the rest of my career,” Terry says. “But it’s not a one-way street; I’m constantly learning new things from younger people about what’s happening with academic research, for example. I’m learning as much as they do.”

Staying on the SHPE

He’s also stayed involved with SHPE. During last year’s National Convention in Phoenix, Terry was part of a contingent of BAE Systems employees sent to recruit potential interns and employees: conducting interviews, taking resumes and talking to students about the benefits—and challenges—of a career in engineering.

But those outreach efforts were merely the precursor to another, more exciting, moment. On the final night of the convention, Terry was one of 26 people to be honored at SHPE’s STAR Awards Gala—alongside such luminaries as Dr. Ellen Ochoa, the first Hispanic woman in space. 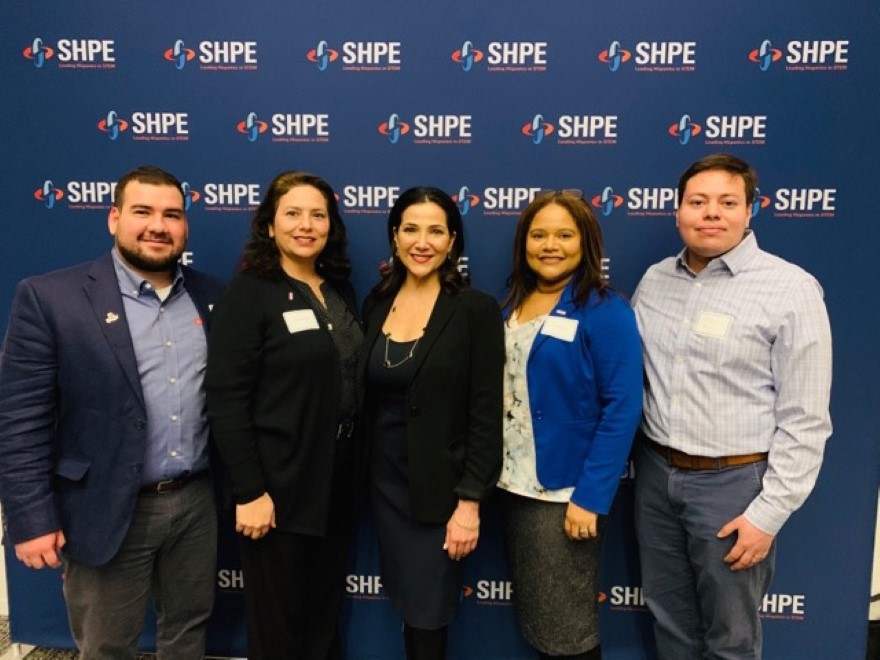 With his immediate family in attendance, Terry received the SHPE STAR of Tomorrow Award, given to an engineer “with three to seven years of experience who has demonstrated outstanding technical performance and is recognized by his peers and superiors,” according to SHPE’s website.

“This is always one of my favorite awards to give, because you’re seeing the future of Hispanics in STEM right in front of you,” says Raquel Tamez, SHPE’s CEO. “Louis epitomizes everything that this organization wants our young engineers to become.”

For Terry, the honor was a humbling one—and a catalyst, he hopes, for greater things to come.

“Honestly, I wasn’t expecting to win,” Terry says with a laugh. “It really was the culmination of so many of the objectives I’ve had. I’m so grateful to BAE Systems for submitting the nomination. I’ll never forget it. But it’s not going to stop me from working even harder.”