The uncalculated approach of a publicly elected comptroller

Martin Matson, Milwaukee’s Chief Financial Officer, first knew he had a knack for numbers when he found himself stationed—quite by accident—behind the cash register at an annual church fair. He had volunteered for a few summers, but at age 12, this was his first foray into handling other people’s money.

“I discovered that I was good at making change,” said Matson, now in his second term as one of only a dozen or so city comptrollers nationwide who are elected. “Granted, that seems simple, but it gave me the idea that ‘I like math. This isn’t so bad.’ I was okay at it in school, but never really thought anything to do with numbers was something I wanted to do.”

With the re-election now behind him, Matson’s able to focus once again on effecting change in the city’s accounting and financial reporting. In his position, Matson supervises many divisions—payroll, grant monitoring, internal audits, public debt, the finance area that verifies revenues and projects, the budget, general accounting (payables and receivables), administration and a small IT division.

“While campaigning, it’s very busy,” he said. “Lots of people want to talk to you. It’s nice when the election is done. It’s like a light switch goes off. From a personal perspective, you want to make changes and have them happen quickly. But it really turns gradually, and not all at once.”

Which gives him plenty of time for contemplation.

One of the things he’s thought about is how to streamline the interdepartmental requisition and invoice process, which deals with reimbursable expenses between city departments. They wanted to retain accuracy and transparency, but needed a better turnaround time. “All of these documents would flow through my office, but we weren’t very good at processing them. It was starting to affect financials, in general. Instead of departments relying on the system to tell them exactly where they were, they had to develop spreadsheets to track these credits and debits,” he says.

Born and raised in Milwaukee, Matson says the local culture is like “one degree of separation.” Everyone knows everyone.

“Now, we’re doing a final review after the fact, instead of all the way along. If there is a mistake, we can always go back and correct it.” The process has gone from four weeks or more to five business days.

Born and raised in Milwaukee, Matson says the local culture is like “one degree of separation.” Everyone knows everyone.

He worked in a factory out of high school, delaying college for a year. While at the University of Wisconsin, he got a full-time job at a bank and took additional night classes to earn his degree in six years.

“By the time I was in the [Management Information Systems program], I was already working in a bank and loving every minute of it. It was a fantastic opportunity for me to solidify my accounting,” Matson says. “By the time I got to the city job [at the Bureau of Municipal Equipment in Milwaukee (BME)], I had significant background experience. Looking back, it seemed like a natural path, but I didn’t think about actually running for comptroller until I’d been here a while.”

Collaboration and no surprises

Now nearing a quarter-century of service to the city, Matson reflected on his path, from the BME to Buildings and Fleet area, and then to the retirement system, where he served for 13 years as deputy director. In 2012, he ran for mayor, but never made it to the ballot.

When he heard that the current comptroller was retiring, he decided to throw his hat in the ring. The goal, he said, was to prove that he could get his name on the ballot. “It was very humbling at the time and a lot of effort. I did a lot of work in the first four years, to improve the functions of reports and to be as transparent as possible.” 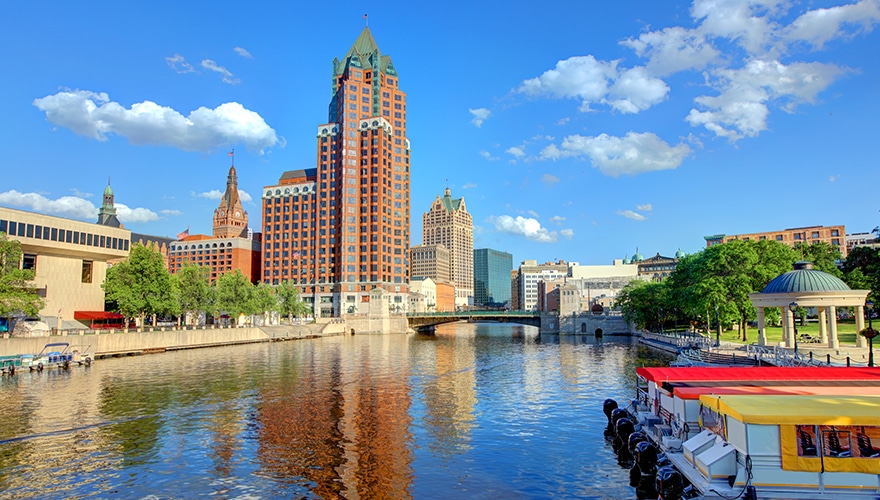 A city known for being fiscally conservative suits Matson’s leadership style—“collaboration and no surprises,” he calls it. If Matson can’t give an answer someone wants, he asks if there is another way they can go about it, another route.

“There are multiple ways to do almost anything. That’s true of everything in life. I might have a way I would do something, and a manager might have a different way. You have to manage the people who work for you, but step back enough, give them enough rope, so that they are doing the job themselves,” he said. “Just because they don’t do it exactly the way you do it, isn’t necessarily wrong. I try to allow people to go about things in the way they deem best—as long as they come up with the same end product.”

Light of hand and foot

Matson oversees 60 positions and a $1.5 billion budget. The management team meets on regular basis, but Matson says he lets the managers lead, only stepping in when necessary. “A predecessor told me once to never make a decision if I didn’t have to, to let someone else make it for me. And later is better.”

“Better late” is also an approach Matson has taken with his personal life. He and his wife watched their daughter, Marina, dance for 13 years, and then they decided to give it a try. The couple fell in step immediately, and enjoyed eight years of dancing together at the local Irish festival. They were not able to dance last year, however, as his wife took ill. She passed away in May.

Someone told Matson at the funeral they were so sorry for his loss. “I told them not to be sad. I’ve been very blessed and had wonderful years with her. It’s very hard, but her dying has, in a way, made it possible for me to start a new phase,” he said. He loves spending time with his grandson, and is considering returning to language classes. He expects he will soon return to dancing again, too.