Multi-talented and determined to succeed

Talking with Chad Sayers, the question inevitably arises: Is there anything he hasn’t done? A jack-of-many trades, Sayers is the architect behind the soon-to-be released—and long anticipated—V SQUARED, a self-described smartphone designed to top all smartphones from his Salt Lake City company, Saygus.

But the road of life has taken him along many paths (and quite divergent ones).

“I put myself in places just by working hard,” says the driven and energetic father of four. “I’ve always pushed my limits.”

A go-getter out of the gate

Growing up in a working-class California family, he quickly learned the importance of hard work and financial acumen.

When, at the impressionable young age of 7, he wanted a model airplane, his aunt suggested that he make the money to buy one himself, so he began collecting discarded soda bottles. He also gathered and fixed broken candles from his father’s candle factory that he then sold to friends. He bought the model plane himself. 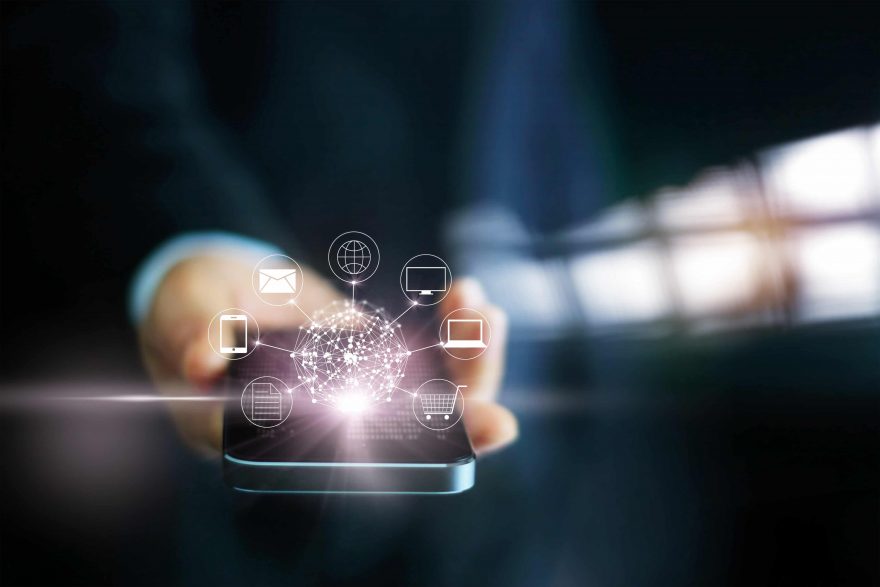 Just a few years later, at age 12, he went to work for his uncles in their construction business. They didn’t coddle him; he was expected to work just as hard as any other crew member. His focus was masonry, and he served as what’s known as a “hod tender,” preparing sites for installation by hauling bricks, rocks and stone as needed. He also mixed and schlepped cement in wheelbarrows.

“It was a great start at hard work,” he says—and one that ultimately prepared him both mentally and physically for future roles in business as well as athletics.

Although a “shy guy” until his junior year in high school, he excelled in wrestling and varsity football, securing a No. 2 ranking in the state for his weight category despite having just one year of wrestling experience at the time.

This was because he trained with a world champion daily and learned the power of the psych out, Sayers says, which involved pretending to have energy to take down competitors as they became winded and weary, like him, at the very end of matches. Meanwhile, he secured himself a spot on the varsity football team—not because he was the fastest or strongest, but because he developed stellar catching and route running skills, he says.

He continued with football at the top-ranked Dixie College (now Dixie State University) in St. George, Utah, where he also ran a gymnastics club after having worked alongside an associate who is now an Olympic coach. As an unknown walk-on, Sayers earned a full scholarship, becoming one of the team’s top wide receivers. Well on his way at Dixie—and with NFL aspirations—he even got the opportunity to try out for the San Diego Chargers (now the Los Angeles Chargers).

His plans, though, were sidelined when he sustained a serious, career-ending injury during a practice. Determined to recover, he trained hard, playing again just a few years later in a full pad league.

Still, he doesn’t lament the past. He has learned from both his wins and his losses—and is thankful for both. His father, uncles and coaches instilled in him the importance of hard work, dedication and focus, he says, and also emphasized that it’s the hard times, especially, that make one stronger.

“I do feel like I’m the luckiest guy who ever lived,” he says.

Still, Sayers’ past wasn’t only defined by his athletic achievements: He is essentially a modern-day Renaissance man. As a starter in high school  tennis, track, wrestling and football, he pursued football while coaching gymnastics in high school and college. He also made time to perform and sing.

He started out performing a cappella as a “not so good” baritone with his high school “Madrigals” group and continued to hone his voice in ensuing years, training in opera and performing in musicals in Southern Utah.

Later, he secured a musical theater scholarship at Weber State College in Ogden, Utah, where he auditioned for Andrew Lloyd Webber’s “Cats” and was offered a two-year contract to perform in their traveling troupe with six months guaranteed on Broadway in at least a back-up role. He even signed a recording contract with an independent label and was offered to sign to another record label when the label’s executive heard him singing and playing guitar at local eatery.

Among other notable achievements: He produced a magic show in Las Vegas; he was recruited to run for Congress (not interested); and he helped an inventor get a bicycle bubble machine into circulation at Walmart.

Still, all this time he kept his eyes on the prize: To become a multimillionaire and finance projects that are deeply important to him. Today, that’s the V SQUARED, which recently passed the Federal Communications Commission-approval process and is undergoing testing for connectivity and user experience.

Ultimately, Sayers says, success isn’t easy, but it can be achieved through a strong work ethic, dedication, a positive attitude—and a commitment to never giving up. In his case, he also credits his drive, his ability to think on the fly, and his concern for “doing things the best way”—all of which is reinforced by his Mormon faith.

“That played a big role in my commitment to be my best,” he says.

Still, he’s humble about the strides he’s made.

“I’m just a regular guy who doesn’t have anything advantageous over anyone else,” he says. “I’m willing to work 24/7 for my ideas. I didn’t really play in softball or basketball or bowling leagues. I just focused on my plans and worked them. The talent that matters is the talent we make. That’s the talent that makes anything truly great.”

Sayers plans to use the same philosophy that has created success in his other passions to ensure that his company Saygus creates the best smartphone ever made.