From Girl Scout to Rocket Scientist

Not long into her tenure as president and CEO of CommuniCard, Sylvia Acevedo received a phone call from a researcher at Stanford University, where she had received her master’s in engineering two decades earlier.

As one of the first Latina students to earn a graduate engineering degree from the prestigious school, Acevedo was asked how, at a time when most Hispanics students weren’t finishing high school, she came to pursue a career in technology. 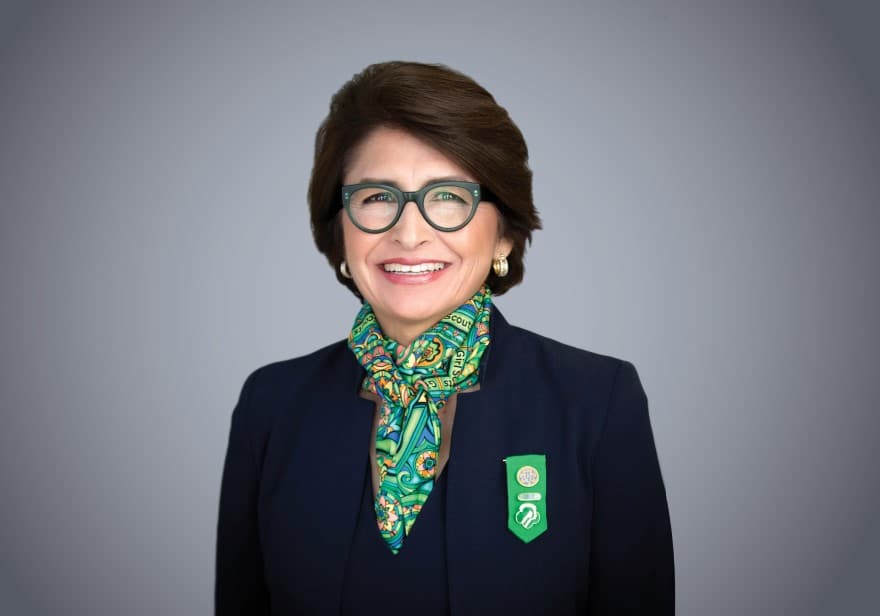 Beyond the obligatory nods to mom and dad, to the teachers and mentors who encouraged her passion, there was one thing Acevedo credited with turning her curiosity into a full-throated calling. Though it took saying it then and there, aloud and over the phone, for her to realize just how powerful the experience had been.

“I had this realization while I was doing this interview that everything changed because I joined the Girl Scouts,” Acevedo says. “Camping out and talking about the stars and constellations; how the cookie program taught me about goal-setting: If I hadn’t been a Girl Scout, I wouldn’t be where I am today.”

Straight to the top

Galvanized by her epiphany, Acevedo grew more involved with Girl Scouts of the USA (GSUSA). She volunteered at her local Texas council, supporting the cookie and robotics programs and helping with new member acquisition.

In 2008, she was invited to serve on the organization’s national board, where she drew on her experience in the tech and business communities to help the Girls Scouts outline its vision for the future. 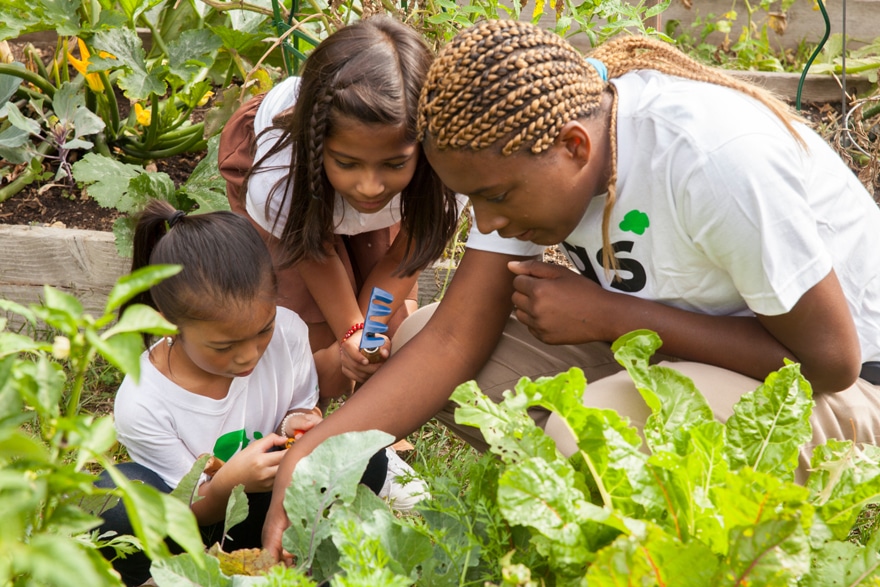 Then, in the spring of 2016, came the offer of a lifetime: The organization’s CEO, Anna Maria Chávez, was planning to step down—and the board wanted Acevedo to take her place. She gladly accepted. With less than a year until she’d be holding the reins full time, Acevedo wasted no time in setting the expectations for her tenure.

“My main message was: We have to meet the girls where they are,” Acevedo recalls. “And that meant creating programs that were relevant to today’s world, and helping girls build those skillsets to help them thrive.”

Meeting that goal would mean creating more dynamic programming for the Girl Scout’s 2.5 million members. It would also involve bringing those programs to market as quickly as possible.

Within three years, the organization had introduced 100 new badges relating to STEM (short for science, technology, engineering and math). There’s one for cybersecurity, requiring girls to demonstrate how they’d safeguard their online presence; ones for coding and digital photography; even one for roller coaster design.

According to Acevedo, more than 129,000 cybersecurity badges were awarded in the first year alone. That’s in addition to the nearly 750,000 outdoor badges—many of them STEM-focused—issued during the same period.

“We saw immediately that there was interest in these programs across the organization—in rural communities, in urban and suburban communities—everywhere,” Acevedo says. “This is how we change the conversation and get everyone, especially parents and teachers, to recognize when a girl shows interest in STEM and to encourage that interest.”

Even the organization’s iconic cookie program—an enterprise that brings in more than $800 million annually, besting Oreo’s sales by $125 million—is experiencing a STEM-inspired overhaul.

In 2014, the organization introduced Digital Cookie, a platform that’s helped to revolutionize the 100-plus-year-old program. Now, instead of tracking their sales on paper forms (or Excel spreadsheets), scouts can use Digital Cookie to build their own websites (complete with video and other features) and create a marketing plan. 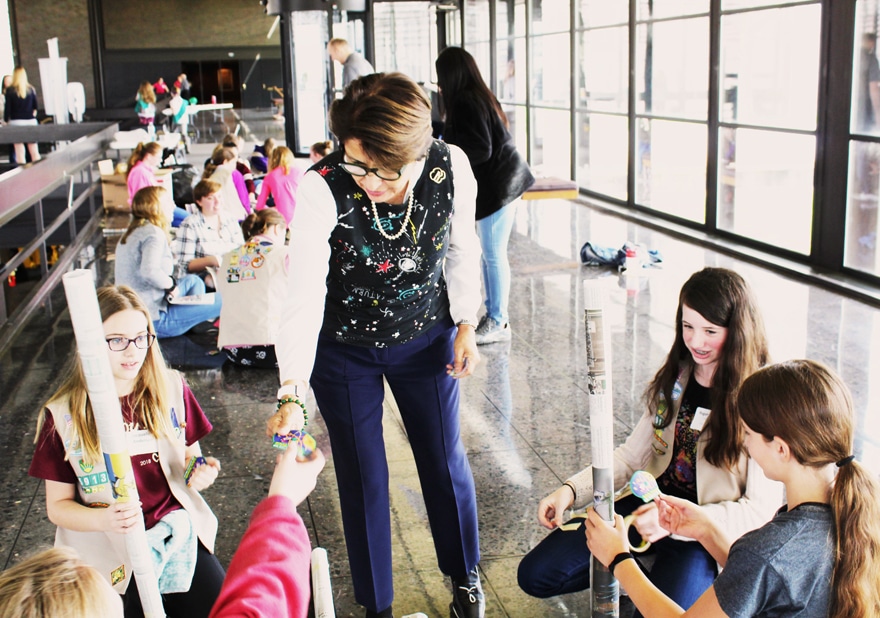 The organization is also working to improve its cashless payment options.

“The cookie program teaches these girls amazing business skills and these technology pieces are only making that easier,” Acevedo says. “All of the money stays local and we even give a percentage of the funds to the girls themselves so they can invest in projects to engage their troops even more.”

To be sure, it’s a quantum leap from where the Girl Scouts were when Acevedo was growing up—though that never stopped her from making the most of her involvement.

On the right path

In her 2018 memoir, “Path to the Stars: My Journey from Girl Scout to Rocket Scientist,” Acevedo talks proudly about her Hispanic roots. All four of her grandparents were born in Mexico—as was her mother. Her father, an Air Force veteran, was from the border city of El Paso, Texas. Born at Ellsworth Air Force Base in South Dakota, Acevedo had a typical childhood for first- and second-generation Americans—in ways both good and not so good.

“We lived paycheck to paycheck for a long time, to where we had to stay with relatives,” Acevedo recalls. “When we finally landed on our feet, the only thing we could afford was a house in a low-income area of Las Cruces (New Mexico) where the streets were unpaved. But I loved it.”

A meningitis outbreak compelled Acevedo’s mother to move the family across town. But while the new neighborhood was safer, the resulting cultural shift caused Acevedo to become withdrawn. When a friend recommended that she consider joining the Girl Scouts, Acevedo was hesitant. The apprehension didn’t last long.

“When I joined the Girl Scouts, I really grew into who I was,” Acevedo says. “My mom was really good about encouraging me, which made all the difference.”

Reach for the stars

After earning her bachelor’s from New Mexico State University in 1975, Acevedo was accepted into the engineering master’s program at Stanford University—one of the first Hispanic women to do so.

Following her graduation, she worked as a rocket scientist for NASA’s Jet Propulsion Laboratory in Pasadena, California, where Acevedo contributed to both the Voyager 2 and Parker Solar Probe projects.

“The Parker Probe is on its way to the sun as we speak,” Acevedo beams. “It’s pretty crazy to think about—something you worked on traveling millions of miles.”

Transitioning from rocket science to the bourgeoning field of computer technology, Acevedo followed up her stint at NASA with an eight-year run as a systems engineer for IBM. Over the next 30 years, she became an executive at Dell; a member of Stanford’s Alumni Board; and a member of President Barack Obama’s White House Initiative for Educational Excellence for Hispanics.

Through it all, Acevedo has been a fierce advocate for Hispanics in STEM, and during the 1990s she became increasingly involved in an organization committed to that very cause: the Society of Hispanic Professional Engineers (SHPE). A longstanding member of its Austin, Texas, chapter, Acevedo has spoken at numerous SHPE-sponsored events, where her message has focused heavily on bringing more young Latinas into the STEM fold. 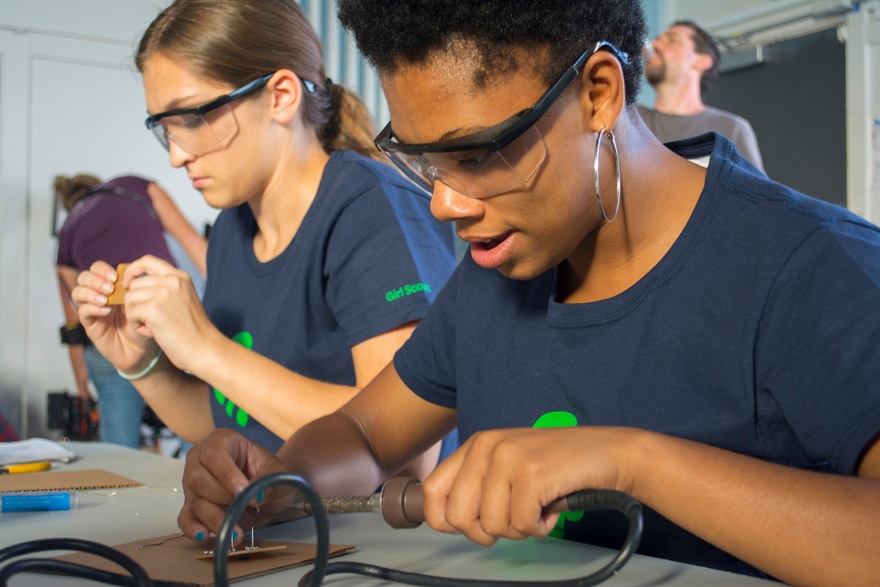 At SHPE’s annual convention this past November, Acevedo received the Ruben Hinojosa STEM award, named for the retired Texas congressman who worked tirelessly on the issue.

“I can’t begin to describe what an honor that was,” Acevedo reflects. “But I want everyone at SHPE to know that the work doesn’t stop. When you’re a pioneer in your field, it’s so important that you don’t just leave a path for others to follow; you have to leave a highway.”

Raquel Tamez, SHPE’s CEO, was effusive in her praise of Acevedo.

“Sylvia is an absolute hero to so many Hispanic girls,” Tamez says. “What she’s doing for the Girl Scouts is incredible. Today, 14 percent of Girl Scouts—250,000 girls—are Latinas. That’s a great number. This is what we mean when we talk about building not just a STEM pipeline but a STEM superhighway.”

Heading into 2020, Acevedo says SHPE, much like Girl Scouts, has never felt more dynamic—or imbued with potential. But like that first fateful meeting all those years ago, she knows that the first step is always the most important.

“A majority of women who’ve gone to space have been Girl Scouts,” Acevedo says. “More than half the elected officials in Washington are Girl Scouts—including 60 percent of the women in Congress. All three female secretaries of state were Girl Scouts. The more girls we bring into the fold, the more change we’ll effect. It’s more than a youth organization; it’s a launching pad to an amazing career.”

Acevedo would know: Hers is still headed to the sun.