In the works for nearly a decade, The New York Wheel on Staten Island broke ground in spring 2015. The project, featuring a prominent 630-foot observation wheel, is the culmination of joint efforts between a number of New York City developers, contractors and investors. Led by Rich Marin, CEO of The New York Wheel, the team is pulling together in the beginning of a two-year construction cycle.

Marin joined the action in 2010. “At that point, there were a few guys who are minority investors who conceived of the idea a few years before that, though it’s hard to say how much had come together,” he recounts. “They had presented a proposal to the city to put this wheel up on Governor’s Island. When several other large investors proposed the site, they got shut down by the city; they were at a dead stop.” 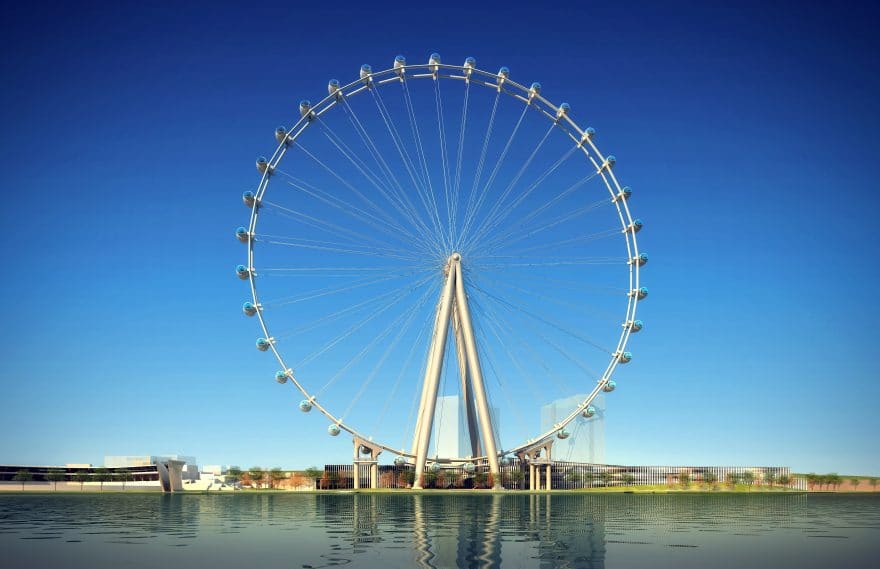 The team approached Marin, requesting that he get involved with revitalizing the effort with the city. After some deliberation, the team brought out another proposal – this time for a site on the north shore of Staten Island.

There were two plots of land available: a 6.8-acre lot between the ferry terminal and the ballpark and an 8-acre lot west of the ballpark – both with zoning restrictions. Over the course of 2011, Marin and his team prepared a presentation, submitted it by the deadline of Nov. 10 and heard back three days later.

“The city wanted to engage with us and discuss this,” says Marin. “They had an RCI set up at our urging, oriented toward the concept. In the end, the city decided to sell the lots separately – one to us and the other to developer, BFC, which wanted to build an outlet mall there. When it was made clear that the city wanted to do more than one or the other, we talked with BFC, agreed on who would take each lot.”

The group obtained approval at the end of 2013 and officially launched the project. Marin describes the process as comprised of four parts: first approvals, second financing, third construction and fourth operations and marketing.

“We have to be working on all four of those parts at every stage,” he explains. “Though each stage has a more dominant aspect, we passed dominant approval stage; we are closing on the financing phase. When that happens, money will be sitting in bank accounts to be wisely spent to complete the project.” 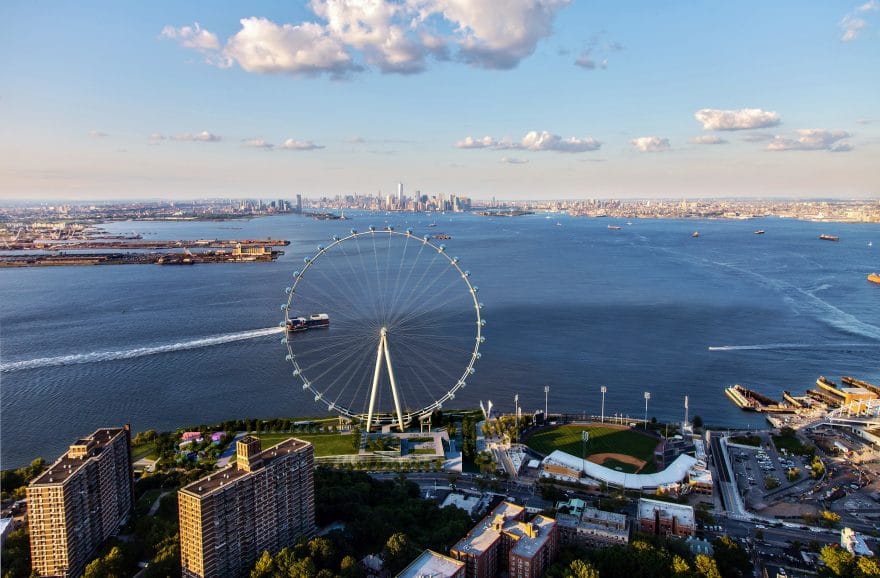 As the project moves into the construction-dominant phase, a majority of the design and engineering work is complete. “At this stage, we are now ready to put shovels in the ground,” says Marin. “We have had site possession since October. We have done drainage and site work, and we are ready to begin foundation work. We’re prepared for the big two-year push for construction. Then of course as we progress, we’ll be doing more stage four work: preparing for the opening and getting the marketing arrangements in place. That includes deals with the waterborne transport providers, such as getting the ferry dock built and all the things we need to get the visitation; we want to make this successful.”

The major design theme of The New York Wheel is visual – building an ocular experience for visitors not only from a sightseeing standpoint, but also from an interactive one. First, the Wheel itself will be an iconic visual addition to the New York skyline and New York Harbor. “Think of the harbor as framed now by several key, large elements,” Marin elaborates. “You have the Statue of Liberty, One World Trade Center, the Manhattan skyline, the Brooklyn Bridge, the Verrazano Bridge and then the wheel. It creates a nice footprint of New York Harbor. Now you’ll see large, iconic elements at every corner.”

“It’s going to be a fantastically interesting ride and we plan to play on that in the sense of programming to take full advantage of it.”

Then there is what Marin refers to as the more obvious visual element of The New York Wheel. The wheel itself is 630 feet tall and will accommodate as many as 1,400 passengers per revolution in glass gondolas.

From way up there, visitors can view the whole harbor. On the water, guests will see the working waterfront, complete with container ships and docks. Liberty Island is straight ahead, followed by a view straight up the Hudson River.

That visual is followed by the midtown skyline, Brooklyn Bridge, Governor’s Island and Brooklyn to the right.

Coming down, the view includes the Verrazano Bridge, the largest suspension span in the Western Hemisphere. Following is the view over the Atlantic, with Sandy Hook all the way to Coney Island. Headed back down to earth, the wheel presents the Iconic Staten Island Ferry Terminal, Lighthouse Point and what Marin considers to be the prettiest minor league baseball field in America.

“It’s going to be a fantastically interesting ride and we plan to play on that in the sense of programming to take full advantage of it,” notes Marin. “Some observation wheels leave it to you to look out, but we’re more inclined to be more programmatic about it. We want The New York Wheel to be more engaging, more interesting, bringing different ideas in play. This will be an observation attraction instead of just a high place to stand and look out.”

Marin and his partners are tying in technology as a secondary theme. In order to build a more interactive experience, the group is integrating touch screens and digital information panels that offer more detail of the views and the history of New York.

The interaction begins in the ferry terminal where The New York Wheel will use large media walls and screens to inform, entertain and engage while people are waiting or after they return from a trip up the wheel.

“It’s a 38-minute ride, but we want visitors to spend a few hours with us in total from the time they get on and the time they get off,” says Marin. “We want them to enjoy the displays, eating, shopping and the interesting visual elements throughout the terminal. Last but not least, we have a 7-acre green roof that will feature a beer garden, a stadium overlooking the harbor and a lawn for gatherings, concerts and other outdoor events in good weather.” 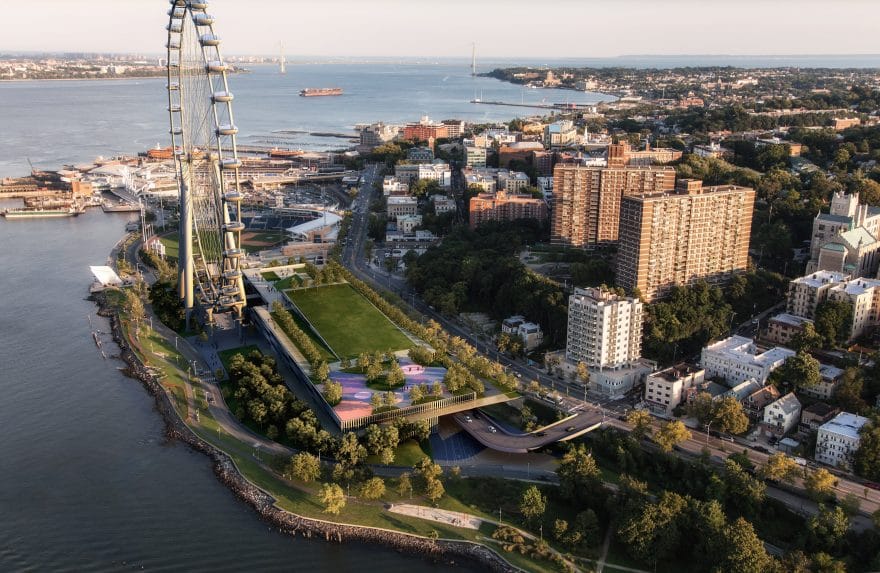 The green roof will serve as a major component of the project’s sustainability goal, which is the third major theme. The project will achieve at least a LEED Silver rating and Marin says the team is aiming for Gold. “We are putting a lot of resources into landscaping and beautification elements,” he says. “This will be a place that 3 million to 4 million people wander through every year and we don’t want to take anything away from iconic nature of what we’re building. Visitors should be as impressed with the grounds as they are with the wheel.”

With the green roof and other specialty landscaping features, the operation will capture and effectively treat rainwater that falls, absorbing and storing it in cisterns, then releasing it once properly treated. “We want to help keep the harbor cleaner through our efforts and water gathering techniques,” says Marin.

While other green elements were considered, such as renewable energy resources, the company had to make a difficult choice between photovoltaic panels and wind turbines, and usable space. Through meetings with community members, the team determined that creating more usable space for visitors and community members was a better fit for the project.

“We did give up some renewable elements but by popular demand,” Marin explains. “Instead we are making sure all our various elements of construction and design are as energy efficient as possible – all managed through LEED standards and energy auditing.”

In just a few short years, New York City will have a new landmark. Marin and his team continue to make preparations for the attraction as construction begins, working with community members and the city to provide solutions that boost visitation while maintaining the essence of New York.

The New York Wheel promises to deliver awe-inspiring views, educational opportunities and an unforgettable experience, all while prioritizing the community and environment.