Following months of legal legwork, Orbital was able to use what’s known as a Forward Morris Trust—a legal, tax-free transaction combining elements of an acquisition and a spinoff—to create the $4.5 billion Orbital ATK. 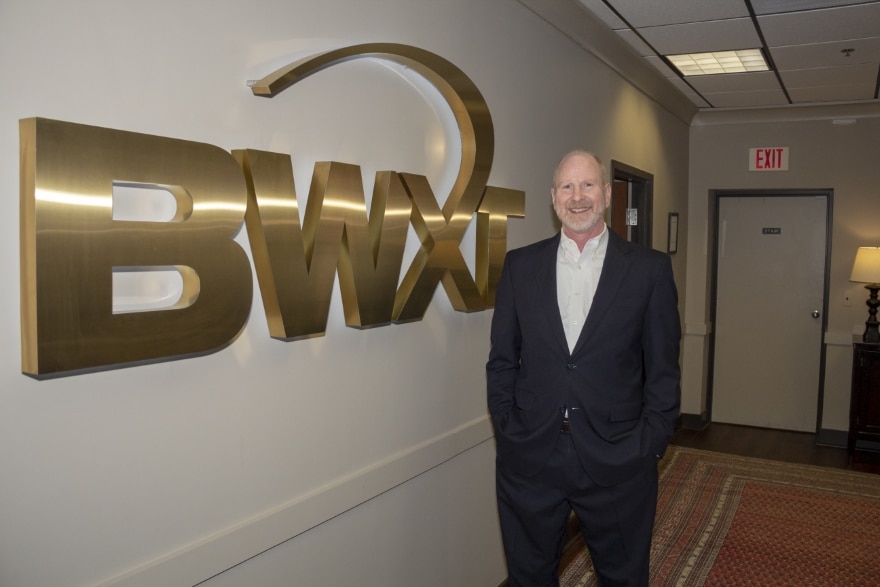 One can be forgiven for thinking it’s all very complicated: According to McCabe, it was the first Forward Morris Trust deal completed this century.

“It was the perfect vertical merger, in that Orbital manufactured rockets and satellites and ATK made a lot of essential components,” McCabe recalls. “But getting across the finish line required a lot of hard work and creativity.”

Three years later, McCabe found himself on the other side of that equation, negotiating the successful sale of the company to Northrop Grumman in 2018 at an enterprise value of $9.2 billion, roughly seven times the $1.3 billion enterprise value of the company he joined in 2014.  As a result of his leadership through these complex legal waters, McCabe was named 2018’s Outstanding Chief Legal Officer by the Association of Corporate Counsel’s National Capital Region.

Shortly after the sale was completed, McCabe was named senior vice president and general counsel of Lynchburg, Virginia based BWX Technologies, Inc. (NYSE:BWXT), which makes nuclear reactors, fuel and components. Amid such a corporate whirlwind, keeping one’s bearings can be difficult. Luckily, McCabe keeps the perfect corporate compass ready at hand.

Owing to a deep background in business—CEO of two startups, Lean Six Sigma Green Belt certification, a joint JD-MBA from the University of Notre Dame—McCabe takes a more nuanced approach to the company’s legal affairs.

“When you have felt the pain of being the person responsible for delivering net income to the bottom line, it makes you empathetic to what your C-suite colleagues have to go through,” McCabe says. “My job is to help them achieve the success they’re looking for in an ethical, transparent way.” 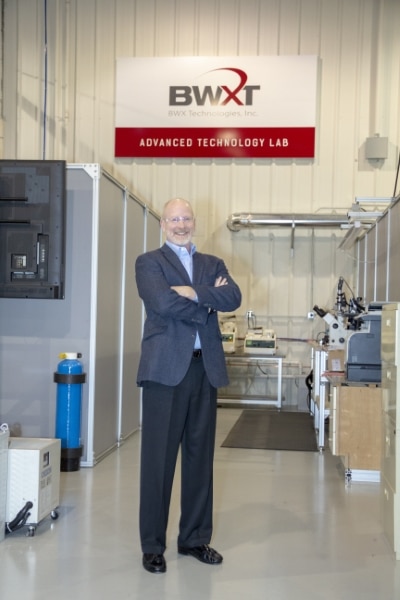 Given the agencies that interface with BWXT—including the Department of Defense (DoD), the Nuclear Regulatory Commission and the Securities and Exchange Commission—such transparency is paramount.

Whenever BWXT begins developing a new technology or product—say, a new medical radioisotope technology or nuclear propulsion method—McCabe and his team first ensure that the underlying intellectual property (IP) is fully protected by the U.S. Patent and Trademark Office.

When customers become interested in the technology—or open a solicitation where it may be applicable—the focus shifts to getting the right contracts in place. Here, McCabe leans heavily on BWXT’s 100-person legal, compliance and contracts team to make sure the deal not only protects the company, but helps it grow.

“I see my job as empowering our team to let them do their best work, to make their workflow as seamless as possible,” McCabe explains. “The last thing you want to do is hand down advice from an ivory tower. You have to be involved and engaged.”

With America’s defense industry mired in a protracted cybersecurity war—against what McCabe calls “brigades of adversaries devoted to nothing but attacking our infrastructure”—contractors like BWXT are redoubling their efforts to patch any potential weak spots.  McCabe strives to make sure that the CIO and the IT team have full legal support.

“We’re currently seeing the greatest transfer of wealth in the history of the human race in terms of technology that’s being stolen by foreign adversaries,” McCabe says. “That’s allowed them to close the military gap with the U.S. at very little cost and in a very short amount of time. It’s critical that we address that, and it’s equally important that the two departments – legal and IT – have the same mutual trust.”

Right under the tree

The son of a lawyer father and business-savvy mother, you could say McCabe’s career was in his DNA. But after graduating from Georgetown University, McCabe found his first semester at the University of Notre Dame Law School strangely unfulfilling.

On the advice of a friend, McCabe dipped his toes in the school’s joint JD-MBA program. It took exactly one business class for McCabe to change his tune. 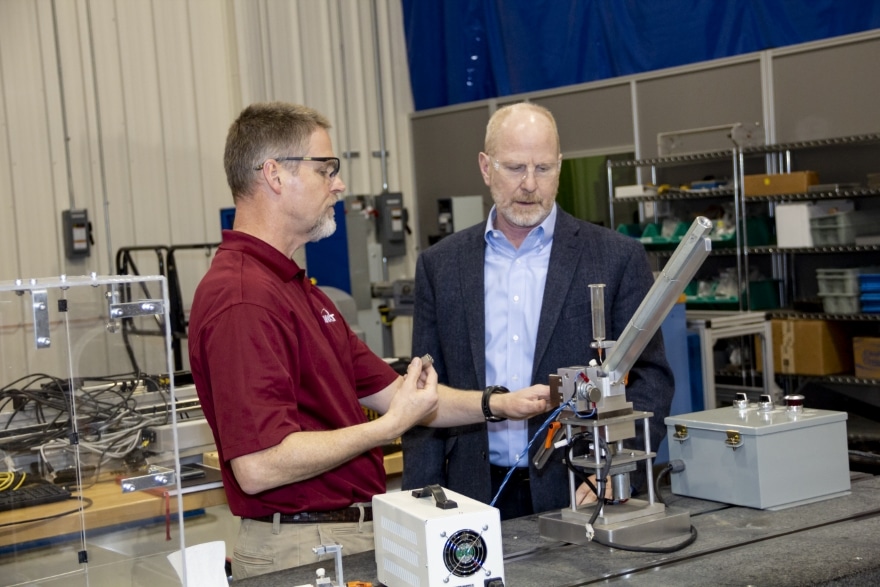 “I was off to the races,” McCabe gleefully recalls. “Having one foot in each camp gave me the perfect foundation.”

In 1992, McCabe made the jump in-house, serving as general counsel for defense contractor GRC International, where he helped orchestrate the company’s record-breaking nine-figure sale to AT&T in 2000. The next year, McCabe and a close friend started their own business: the award-winning software services company COBIS MicroBanx.

From 2005 to 2008, he served as vice president and deputy general counsel for XM Satellite Radio (now Sirius), after which he joined his second early-stage company: Braintech, a publicly traded robotic vision provider, where in addition to serving as GC, he founded and ran the fast-growing government business.

In 2010, McCabe returned to the aerospace-defense world, beginning with a four-year run as senior vice president and general counsel for Alion Science and Technology, followed by his remarkable 2014-2018 stint at Orbital ATK.

Despite the often hectic professional pace, McCabe still finds time for his twin passions: helping underprivileged children and spending time with his family, with a bit of Brazilian jiu-jitsu and running—he recently completed the Lynchburg 10-miler, the hilliest race of its kind—for good measure.

Now, multiple acquisitions and countless late nights later, McCabe understands the stakes at hand, though he knows he has others to help him with the load.

“More than anything, I’ve gotten the most joy out of developing my team and watching them improve each and every day,” McCabe beams. “At the end of the day, life is about other people and finding ways to help them, and that’s a big part of what it means to be an effective GC.” 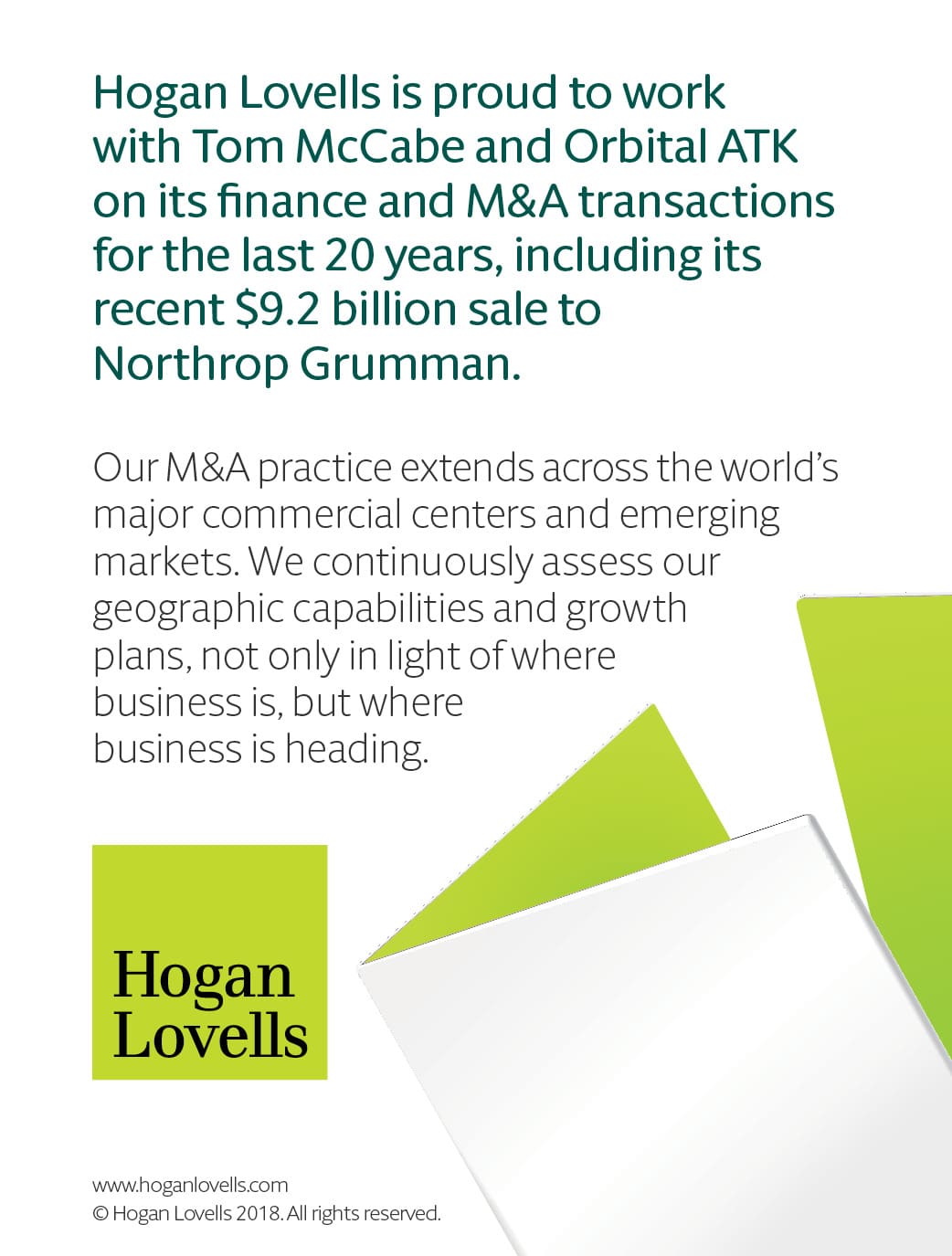